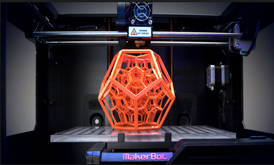 Disruptive innovation, from Uber ruining cities’ taxicab industries to word processing leaving the typewriter as nothing more than a collector’s item, is expected in our forward-moving society. Additive manufacturing, more commonly known as 3D printing, is set on its path to shake and rattle several different and seemingly disparate markets. Questions about which markets it will actually disrupt and when exactly it will become mainstream have started to arise.

The first 3D printer was launched in 1986; if additive manufacturing follows the path of disruptive innovations like the digital camera or MP3 player, which were widely adopted around 30 years after their inception, it should become fully popularized within the next five years. Even today 3D printers can be found in most research labs and universities have even started teaching courses on how to operate and use them. Moreover, 3D printing is currently being used for the delivery of finished goods; we’re beyond using this technology for just basic models and prototypes Additive manufacturing has the potential to be one of the most disruptive innovations of all time. The only question is how many industries it will transform.”

For starters, 3D printing has already been working its way into the medical industry. 3D printers have the capability of “bioprinting” soft-tissue organs, including the kidney. This will quickly shorten the 93,000 person long kidney transplant waiting list. Metal hip implants, skull implants, body braces, and jaw transplants have been bioprinted as well. 3D printing has also allowed for block cell printing, in which 100 percent of artificially produced cells live, as opposed to the usual 50 to 80 percent that survive with the current process.

3D printing is also serving as a new art medium. Apart from just giving artists a new form of creation, they can also be used to recreate certain pieces that aren’t accessible to everyone. For example, Fujifilm and Amsterdam’s Van Gogh museum used 3D printing to recreate several of Van Gogh’s pieces. On the same note, 3D printing has bled into the fashion industry. Feetz, a customizable footwear company, has over 100 3D printers that cost just $5,000 each, hoping to upset mass retailing by cheaply making each pair of shoes to order. Jewelers are also expected to abandon traditional manufacturing processes for 3D printing.

3D printing isn’t leaving the food industry alone either. Food packaging has been 3D printed and is nearly indistinguishable from traditionally produced food packaging. Beyond just food packaging, Foodini and Bocusini are 3D food printers that are on the market currently. The latter has more than 30 recipes which range from confectionary to meat to fresh fruit and vegetables. Moreover, ingredients, like sugar, cheese, and sauces, can be 3D printed.

Aside from medicine, art, and food, additive manufacturing will affect the military as well. 3D printing allows for the “instant production of replacement parts on-site in remote locations.” This is especially important since machinery for the military is often highly customized and replacements must be made as soon as possible to locations that aren’t that accessible. A gun has already been 3D printed, so it’s likely that other weapons will soon transition away from traditional manufacturing processes.

The main issue holding up 3D printing from becoming convention is that the  the supply of raw materials needed for this type of manufacturing is relatively low. Aside from this, the depth and breadth of its potential is truly daunting. 3D printing is going to revolutionize countless markets, and it’s going to do so very soon. The question of what to do arises. It’s starting to feel like no industry is “safe.” Should we sit back and watch this revolution unfold? Should we just invest now? Should we worry that all our skills and talents are will be replaced by 3D printing? To prepare for this imminent revolution, the government may need to increase the supply of raw materials used in 3D printing and possibly subsidize printers and materials for small businesses who cannot afford them.