A Prescription for Disease: Misuse of antibiotics in agriculture poses a major public health threat
By Harichandana Karne 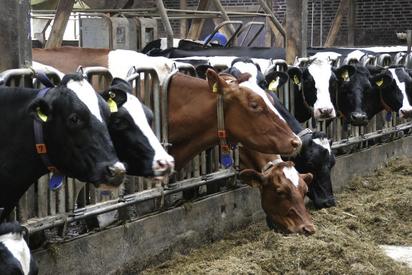 Improper use of antibiotics in plant and livestock agriculture has led to the rapid development of resistant pathogens that modern medicine can no longer treat. While antibiotic resistance is a growing public health threat and has led to increased mortality, hospital stays, and healthcare costs, the United States has yet to regulate antibiotic use in harmful agricultural practices.
​
When the first antibiotic, Penicillin, was introduced in the 1940’s it was hailed as a miracle drug, regarded as one of the greatest developments  in therapeutic medicine [1]. Since its introduction, a number of antibiotics have been developed, and have undoubtedly affected each of us. From treating everyday illnesses such as sinus infections and strep throat to serious conditions such as tuberculosis and meningitis, antibiotics are some of the frequently prescribed medications to infections that would have been deadly just a century ago [2].
Antibiotics treat deadly infections by seeking out and fighting bacterial cells while leaving human cells unharmed [3]. Today, we often take the incredible therapeutic power of antibiotics for granted. However, their inappropriate use has emerged as a  threat to modern medicine. The misuse of antibiotics, especially in plant and livestock agriculture, has led to changes in microbial ecosystems, as many strains of bacteria – including those that causes diseases in humans – are becoming resistant to treatment with antibiotics [4]. This antibiotic resistance then translates to tremendous consequences in terms of human health, including higher medical costs, longer hospital stays, and increased mortality [5].
A major contributor to antibiotic resistance is the improper use of antibiotics in food production. It is estimated that 80% of antibiotics sold in the United States are used in animals –28.8 million pounds—rather than for human medicine [5]. Antibiotics are often added to livestock and aquaculture feed at sub-therapeutic levels for healthy animals to increase yields by enhancing growth and preventing potential illness, often without a veterinarian’s prescription [5]. These quantities of antibiotics are dispersed into the environment as agricultural and water waste, fertilizer, and runoff. Even low levels of antibiotics in the soil, water, and even inside animals cause profound changes in microbial ecosystems and allow to bacteria to adapt in ways to make them resistant to antibiotics. When disease-causing antibiotic resistant bacteria spread back to human populations, we face  a grim public health threat: contagious infections that modern medicine can’t treat [6].
Antibiotic resistance is a real problem that hospitals face every day. For instance, MRSA is an  antibiotic resistant infection kills an estimated 11,285 people every year in the United States – more than HIV/AIDS, Parkinson’s disease, emphysema, and homicide combined [6]. Antibiotic resistance is also a global issue causing an estimated 700,000 deaths each year, and contributing to the concern that as people travel to and from different areas of the world, antibiotic resistant infections travel with them, creating the potential for a global epidemic [7].
For scientists, altering how we use antibiotics in agriculture to reduce disease in humans in a no-brainer – several lines of evidence trace resistant infections in humans to specific meat and poultry operations, to animal-associated bacteria, and to trends in resistance in common bacterial pathogens [8]. Regulations that limit antibiotic use in food production are vital to reducing the emergence of new resistant bacteria. Requiring improved animal husbandry practices such as proper disposal of waste, sanitary farming practices, and reducing overcrowding would help reduce resistance. In 2006, due to public health concerns, the European Union banned the use of all antibiotics for food animal growth promotion, but fighting antibiotic resistance is a global effort. Its time the United States follows suit [5].