Brace Yourselves, And Make Sure You Get My Good Side 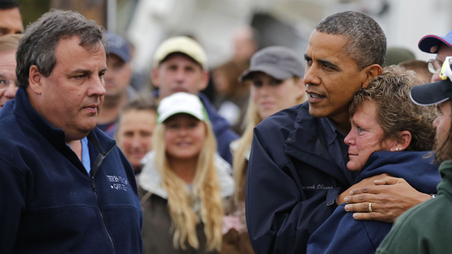 A cell of warm air over the Atlantic coalesces into a tropical storm; it slowly moves to the northwest, gathering strength as it approaches land. The Earth’s plates shift ever-so-slightly along the San Andreas Fault, causing buildings to shake and overpasses to quiver. Heavy rain in the Rockies destabilizes a hillside, and mud tears through trees, bridges, and houses. A siren goes off somewhere in the Midwest, signaling that Tornado Alley is about to live up to its name once again. A mass of frigid air from the far north pushes a vortex of icy wind southward, whiting out states and burying any means of transportation. A long dormant mountain explodes with fire, an ashen cloud reaching up into the stratosphere. Donald Trump gets elected to public office.

Aside from the last one, these disasters happen all the time. We live in a world that we do not control, and sometimes Mother Nature is not the gentlest landlord. We have grown accustomed to the environment in which we live acting in unpredictable ways: there are contingency plans in place, evacuation routes are marked, and there are trained specialists ready to help those in need. We also have speeches and cameras ready.

Natural disasters are unique events for politicians. They usually occur with no more than a week’s advance notice, sometimes no notice at all. Notwithstanding that anthropogenic actions are almost definitely contributing to more frequent climatic events and that human structures built to mitigate disasters can fall into disrepair, humans cannot control when they occur. A typical trope about politicians is that they only look for problems when they know they can solve them, or they know they can get credit for solving them. Natural disasters offer politicians an immediate problem they are expected to solve, and quickly. I would argue that, because the needs of disaster zones are often so dire for the people in them, the most amount of attention possible should be given to them – and, for better or worse, nothing attracts national media attention quite like politicization.

Speed and effectiveness don’t often go together in politics, so pressure is needed from the public to force politicians to act, not just pressure from people locally affected by the disaster but national pressure. When a natural disaster occurs it changes the political landscape to such a degree that decisions can be made faster and deals can be struck with groups that beforehand might not have played ball. Natural disasters also give politicians a singular opportunity for leadership. The ability to act quickly and effectively in a crisis is a trait people want to see in their leaders, and a hurricane or wildfire offers governors, presidents, mayors and others to showcase how qualified they are for the office they hold.

Those individuals must perform well during these events. Many politicians have failed a natural disaster test. The most infamous example would be the response to Hurricane Katrina, which was not only woefully incompetent and horrendously slow, but also probably racist. But, the response to disasters offers initial protection: criticism of the Bush Administration did not come out immediately after the disaster. After about five days, significant national criticism of the administration was prevalent, whereas we know that in other situations people made sure they criticized the administration the very day Bush announced some policy they didn’t like. The public, during disaster situations, is less likely to criticize, say, the president as fast as they would in normal political situations.

An example of this was during Hurricane Sandy, when both the Obama and Romney campaigns effectively shut down for over a week to provide support to the residents of New York, New Jersey, and Connecticut who were most hit by the storm. However, while Romney’s call for volunteers and charity was welcome and productive, he could never possibly compete with the image of President Obama in Commander-in-Chief Mode, touring the Jersey Shore with Governor Christie, meeting with New York officials from Long Island and the City – acting presidential. The Romney campaign couldn’t criticize him, not because he did everything perfectly but because it would have looked like they were trying to score points off of people’s misery. They could not appear to be politicizing the disaster response, even if the Obama campaign could simply use news coverage of the president organizing the relief efforts as free, day-long ads – in other words, politicizing it.

When people here about politicizing natural disasters, they immediately are against it. There is an innate repulsion amongst most people to using other’s misfortune to advance some agenda, political or otherwise. I would argue that politicizing natural disasters, while not to be relentlessly advocated for, does have its benefits. For one, the media loves a fight, and if more attention is given to a particular disaster than it otherwise would have received, that likely means more volunteers will come to help and more money will come in the form of donations for relief. Secondly, the duration of attention on the disaster area will be longer and more conducive to not simply clean-up but recovery and reconstruction, and people most hit by these disasters need and deserve help with all three.

When state governors declare states of emergency, for snow storms, earthquakes, floods, or whatever disaster happens to strike, they acquire more power. Another way that politicizing disasters helps is that it gives a clear evaluation of how effectively leaders can wield that power. If they do so poorly, then the legislature can put more controls on how they use it, and if they do so effectively, they have shown they don’t need any more. Power is something that needs to be carefully distributed so that its abuse can be more easily guarded against. If a politician knows how strongly people feel about disaster relief politics they will be much more judicious in how they exercise that power.

All of this is not to suggest that leaders should embrace politicizing all natural disasters. It would be very unwise for any leader who desires any semblance of empathy to not think of disasters as opportunities for anything other than reminding ourselves of how much our communities mean to us and how fragile our lives are. The idea that people’s suffering shouldn’t be used for political gains is still paramount, but if some are able to harness the more cynical parts of human nature to accelerate disaster relief efforts even beyond what empathy and compassion could do on their own, leading to fewer lives lost and livelihoods destroyed, so be it. Natural disasters always create victims. Why should we let one definition of a moral action, that we should never politicize natural disasters because that means devaluing people’s suffering (a notion which is itself debatable), override an equal or even greater moral action: getting more attention to the disaster even faster than otherwise, and hopefully alleviating that suffering sooner?