Carbon Taxes: What do They Look Like and What Can We Expect?


With the release of the most recent IPCC report earlier this month, the costs of climate change are once again making the headlines. This phenomenon affects everyone as higher sea levels, more extreme weather patterns, and food insecurity loom on the horizon. Climate change is only becoming a more pressing concern as proven by the NOAA’s statement issued this week that global carbon dioxide levels had climbed to 402 ppm- their highest level in nearly 800,000 years.

Despite the concerns surrounding climate change, there are several methods, such as carbon sequestration and increasing investment in renewable energy, for countries to reduce their carbon footprints. These strategies may be insufficient because of the role of developing countries, particularly China. Despite making unprecedented investments in renewable energy, China is still notorious for emitting huge quantities of carbon dioxide at a much greater rate than can be effectively mitigated. Many other countries are having difficulties in meeting their carbon reduction obligations they agreed to after ratifying the Kyoto Protocol more than 15 years ago. We need to harness more powerful methods for reducing carbon emissions and overcome their relatively significant costs. 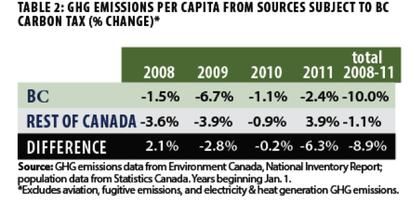 However, a well-conceived carbon tax system can be poorly implemented, as seen in Australia. In July 2012, Australia introduced a carbon tax of $25 per ton of carbon dioxide on its largest emitters, which prompted severe political resistance. The tax was intended to compensate homeowners for increases in costs of living and serve as a precursor for a planned cap-and-trade program. Nonetheless, there have been continual attempts by the Australian government to repeal the carbon tax, which has fueled national and international cynicism about carbon taxes. Many critics have railed against the Australian carbon tax for being far too expensive and hindering economic growth. Additionally, only about half of the revenue generated from carbon taxes was returned to taxpayers, which have minimized future spending and investment in other sectors of the Australian economy.