Changing of the Seasons: Political Unrest in Hungary 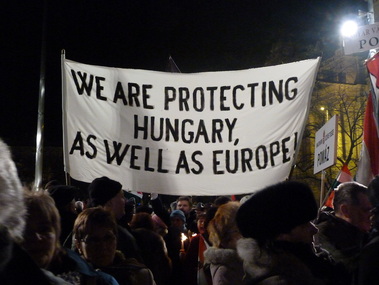 Civil unrest in response to an autocratic leader’s rapprochement with Russia is nothing new in Eastern Europe. In a strikingly similar fashion to the Ukrainian Maidan protests, Hungarians have begun protesting the pro-Russian tilt and dictatorial governance of current Hungarian Prime Minister Viktor Orban. Orban has drastically skewed the distribution of power among political parties towards Hungary’s right-wing Fidesz party – shifting Hungary further away from liberal democracy.

Although Orban and his party were victorious in three successive elections in 2014, his popularity has since diminished in reaction to overt power grabs, such as when he attempted to increase government control of the media by taxing the use of the Internet. Such policies stem in part from Orban’ growing fixation with Russia and Vladimir Putin, a relationship that has stirred increasingly fervent opposition among the public in recent years. Widespread participation in the “Spring comes, Orban goes” protests highlights such resistance to Orban’s rule, as the resistance to his rule is indicative of the broader structural issues in the Hungarian political system. While some might call for some variation of foreign intervention, such a move would be ill advised, as internally driven reform is the only course of action capable of affecting lasting change in Hungary.

Fidesz, or the Hungarian Civil Union, currently holds 133 out of the 199 seats in the Hungarian government. The party maintains an overwhelming majority, despite only garnering 44.1% of the single-member vote and 44.9% of the national vote in the last election. The electoral system appears to be stacked in Fidesz’ favor, with the party’s victories only growing more certain over time. Unsurprisingly, the Hungarian opposition has found it difficult to gain a foothold in government.

This reality leads to voters falling into the trap of ‘false preferences.’  Although there is major disapproval regarding his leadership, Orban continues to gain the votes and support of the general population in every election. Were there to be fair elections in Hungary, Orban would still likely be voted into power as a result of two key factors: his enduring popularity among certain segments of the population and the lack of viable alternative candidates. Orban garners a large amount of support from a number of sectors of Hungarian society due to his bombastic nature and strong embrace of nationalist rhetoric, both qualities that are highly valued at the polls in Hungary.  Simultaneously—and also as a result—other potential candidates have a tough time gaining the type of large following possessed by Orban.

Several possibilities exist which may facilitate a slowing—or perhaps a reversal—of current trends which favor Orban and the Fidesz Party.  Most importantly, the quality of Hungary’s political institutions needs to be increased.  The electoral system blatantly serves to favor the party in power, and pursuing some changes to this framework may well be a worthy endeavor for proponents of democracy in Hungary.  With a more efficient system in place, the playing field for candidates may be leveled to some extent.

With a level playing field, legitimate competitive elections may arise that include candidates from a number of backgrounds motivated by various ideologies and policy preferences.  Most importantly, at the end of all of this, the Hungarian people themselves would benefit greatly from a wider variety of choices.

These drastic, yet hypothetical, changes to the electoral system do stimulate debate as to whether the motives of addressing internal conflicts could perhaps be analogous to democratizing the election process in Hungary. Nevertheless, the difference between both views lie within the justifications behind said change. Internal reform could promote direct and open representation of the people, whereas foreign intervention would generally encourage nationalist sentiment, and in short – it could continue to provoke social unrest. As the masses have already expressed contempt for Orban’s criticism of Hungary’s liberal democracy, a solution to such discontent appears to be more feasible than in history’s past.