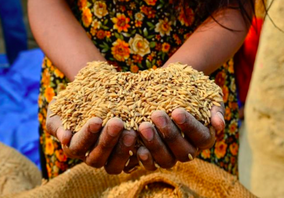 Contrary to the popular belief that climate change won’t have a direct impact on the human population for years to come, in as little as 30 years, as many as 500,000 people could die of starvation and malnutrition due to food shortages. The term “climate change” has been floating around for a long time. It is a term that is dismissed and unacknowledged by many. However, its effects are disastrous and can lead to severe catastrophes in 3rd world countries.

Although we may not always think of our everyday actions, according to the EPA, between 1990 and 2013, the U.S alone increased its carbon emissions by 7%. One country’s carbon emission can have a drastic effect on the temperature, weather, and other unprecedented things like agriculture in different parts of the world. These harsh changes ultimately can deter a person’s ability to have access to food and produce in many countries.

Economically, climate change can decrease production of goods, which in turn can affect those who depend on trade of goods to earn money for a living. On a macroscopic level, 70% of the world’s cocoa comes from Ghana and Cote D’Ivoire, two countries in West Africa. In addition, 90% of the world’s vanilla is extracted from Madagascar. Climate change can adversely affect the production of both these highly valued goods. With a decrease in the production of goods, those whose jobs depend on maximizing crop yield may earn less. Also, these workers may not be able to provide for their families. These communities that depend on certain weather conditions such as rainfall in dry areas and optimal temperature for agriculture are presented with a barrier. The changes in weather conditions prevents them from maximizing crop yield. In addition, data shows that more than 1 billion people in developing countries live on less than $1.25 a day. Putting together poverty and a lack of resources engenders a disaster for many communities that are particularly vulnerable to climate change.

According to a study done by Oxford University, researchers predicted that the effects a global temperature increase of 2°C on food production. They also provided a “healthy” model in which they eliminated the increase in global temperature and carbon emissions. They found that in the worse case scenario with a 2°C increase in temperature had a 3.2% decrease in global food availability by 2050 vs the health model which predicted an increase in 10.3% of food availability by 2050. This translates to possibly preventing 500,000 deaths.
In order to respond to these environmental and social changes, agricultural methods must evolve and improve. Carbon emissions should be mitigated in order to decrease the rate at which climate change is occurring. Although the effect of rising temperatures have been already seen in agriculture in many parts of the world, we ought to find more efficient and cheaper methods of raising livestock and increasing crop yield to feed hungry people in 3rd world countries. As of 2015, 34 countries require food assistance from external resources. Most, if not all are classified as third world countries. It is imperative to note that climate might not have a disastrous effect on developed countries like the U.S. Although we are not directly as affected as other people are in other regions, we should be cautious as a nation to increase our efforts to sequester carbon from the atmosphere. We should be doing whatever we can to slow down the pace of global warming. An enormous number of deaths relating to food shortages and diseases could be prevented otherwise.