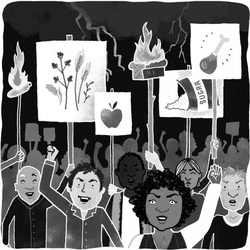 Social change and civil unrest are a part of human culture. These actions are a threat to occur in any society and have been a threat to occur since the beginning of civilization itself. Today, with growing environmental pressures, another factor is added to the depth of social change: climate change.

Climate change is not the sole cause of social revolution around the world today, but it has increasingly shown itself to be a part. Now, climatologists almost universally agree on the fact that global warming is real and caused by humans. Changing weather patterns and climate has real impact on the social and economic level and can be more urgent then the long-term environmental impacts. Climate change will change global weather patterns, changes to global weather patterns will put stress on farmers, these stresses will be expressed in rising food prices, and the rising food prices will expedite social revolution.

2011 was a year of great social unrest, notably in the Middle East and Northern Africa. This period, known as the ‘Arab Spring,’ was characterized by massive protest and revolution that is still ongoing in places like Syria. This period of change had various complex social, economic, and political causes, but climate change was certainly a contributing factor and catalyst of the social upheaval.

Prior to and concurrent with this period of social change, from the period of 2010 onward, North America experienced an intense, outgoing drought. The United States a world-leading exporter of grain and many other agricultural products. Canada and Russia—other major grain exporters—experienced atypical weather as well. Many leading climate scientists would link these climate events to anthropogenic global warming. Due to human action, weather extremes will and are occurring more frequently and global temperatures are rising. The droughts around the world in the first part of this decade are almost certainly caused by climate change. These droughts caused worldwide food prices to increase. Wheat was trading around twice the cost per bushel in 2011 compared to 2010. The Middle East and Northern Africa, the same region where widespread social change was occurring, are home to some the world’s largest grain-importing countries. A poor 2010 and 2011 for farmers caused food prices around the globe to rise. As history has shown, rising food prices can precipitate revolution.

The relation of climate change to social revolution has manifested in the past as well. In the year 1789, after successive years of poor grain harvests, the price of a loaf of bread in Paris rose dramatically, over a 50% increase over the previous year’s cost. This spike in food prices sparked bread riots that were some of the first rumblings of revolution. Obviously, the French Revolution had myriad social, economic, and political causes that have deep roots outside the scope of this article, but nonetheless, bread prices facilitated the movement of social change then as it does today.

A less thought of historical example of the social effects of rising food prices is the American Revolution. At least five states between 1776 and 1779 experienced riots—and in some cases sustained conflicts—caused by rising food prices. During the Irish Potato Famine, after years of devastation in Ireland, in 1848 the Young Irelander Rebellion occurred as a nationalist rebellion precipitated by a lack of food. In addition, during World War II, the Warsaw Uprising is not typically thought about in the context of food. However, the scarcity of food in the Jewish ghetto was one of the most integral causes of the uprising. The Jewish people were rationed less than 200 calories a day. This scarcity of food sparked revolution.

Food is essential for human life and thus, food insecurity will have societal effects. When food prices rise or food becomes scare, riots almost certainly ensue as food is absolutely essential for life. Food insecurity is a cause of violent revolution. With a changing climate, worldwide food supplies are being put in greater jeopardy every day. This puts the world at greater and greater risk of drastic social revolution.

The message of this change now shifts to a warning, a warning to larger nations like the United States, Russia, and China. Climate change will not only increasing the frequency and intensity of natural disasters like hurricanes and droughts, but it will also facilitate uprisings. Even in seemingly stable countries, as climate change continues to occur and food prices continue to rise, protests and violence will become more and more of a threat.