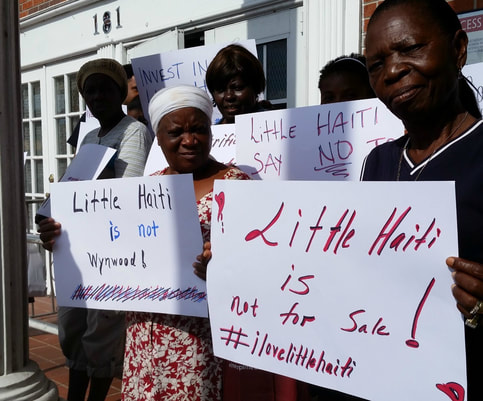 Rising sea levels primarily affect low-lying coastal communities, but, as beachfront residents move to higher ground, historically black and low-income neighborhoods such as Little Haiti are disappearing and their residents forced out to flood-prone areas. The shifting housing market reveals deep-rooted inequality in the region and the need for a comprehensive relocation strategy.
The historic shops and homes of Little Haiti, a neighborhood formed as a refuge for Haitian immigrants, are quickly disappearing and replaced with modern commercial and housing developments. This change is driven by rising sea levels, which have compelled wealthier, predominately white Miami residents to seek the district’s higher elevation. Consequently, rent rates are spiking, pricing out Little Haiti residents from their homes and shops. This forces black residents to move out to flood-prone areas, reinforcing racial inequality.

In the mid-20th century, redlining and segregation in Miami forced black people to live in-land, which, in the case of Little Haiti, happened to be at the significantly higher average elevation of 7 feet. Historically, Miami developers determined beachfront property to be the most desirable and enacted racist housing policies to exclude black people from these neighborhoods. Impacts of historical redlining are still noticeable in Little Haiti today, where the population is 72% black, compared to just under 20% in Miami. In recent years, however, the racial demographics in Miami are changing as beachfront property owners begin to fear the effects of sea level rise and place greater value on elevation than proximity to the ocean.

Miami, like many other coastal regions in Florida, faces a dual threat of flooding from the ocean and inland bays and marshes, risks worsened by climate-induced sea level rise. From 1985 to 2016, sea level in Florida rose 6 inches and scientists predict another 6 inches of sea level rise will occur by 2032. Even small increases in sea level rise have substantial impacts on the frequency and severity of flooding. In the past 10 years, tide-induced flooding in Florida increased 400%.

Increased flooding has begun to take a toll on predominantly white, middle class Miami Beach residents. These residents are starting to sell their beachfront homes and purchase property in Little Haiti, driving up average home values by 135% in the past five years. In 2014, developers bought out Magic City Trailer Park, displacing around 40 families in the 86-year-old community, with plans for a $1 billion project to build a new “Innovation District.”

Developers are pricing out long-time residents and shopkeepers and forcing them to move to now cheaper flood-prone areas, in a process social scientists term climate gentrification. This reversal of historic housing practices is problematic for several reasons, including the loss of history and culture and the reinforcement of racial inequality.
​
Government regulation must protect existing neighborhoods from rising housing prices to prevent low-income residents from being forced out to flood-prone areas. Local governments should also enact historic preservation and zoning laws to protect the rich history and culture of districts like Little Haiti. As sea level rise becomes a foremost concern for coastal communities, local and federal governments must develop feasible long-term plans for relocation. Governments should subsidize developments in higher elevation areas near coastal communities to offer viable alternatives to gentrification.