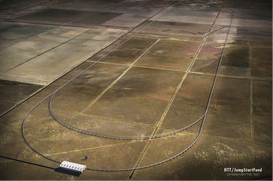 All the “hype” is finally being answered.  Last night in London, Bibop Gresta, Deputy Chairman of Hyperloop Transportation Technologies, announced that the construction of a full-sized prototype of a hyperloop system will start within the next three weeks.  That’s right, Elon Musk’s dream of hyperloop transportation, thought by critics as science fiction, is becoming a reality.  Covering a five-mile stretch in Quay Valley, the test track will cost about $150 million and take around 32 months to complete.  During the testing process, the tube is expected to transport over 10 million passengers.

The plan for “Hyperloop Alpha” was first conceived by Elon Musk, CEO of Tesla Motors and SpaceX, in 2013.  The proposal called for an intercity tube linking San Francisco and Los Angeles that contains capsules traveling at almost 700 miles per hour.  “The Hyperloop design uses a combination of low air pressure and magnetic acceleration to get people from LA to SF in just about 30 minutes,” states the original report.  A project between the two cities would cost somewhere around $16 billion, and although it is a hefty price, the number is significantly cheaper than the approved high speed rail project costing $68.4 billion.  The report has recently looked at going abroad as well.  In the United Kingdom, a connection between Glasgow and London, costing between $6 and $8 billion, would cut travel time to 30 minutes, saving passengers from traffic jams.  What’s even more exciting is the entire hyperloop system will run on renewable energy.  Lining the top of the tube will be solar panels, capturing more than enough energy to substitute for night travel and prolonged rainy days.

At the event in London last night, Bibop Gresta said the project, “will completely change humanity."  An urbanized world with large population growth will require new modes of transportation to be developed, and Gresta thinks the hyperloop will be a leading innovation.  The system is designed to be earthquake and weather resistant while supporting over 3,400 passengers per hour, nearly 24 million per year.  Eventually, Gresta hopes the new hyperloop will have electronic screens surrounding the passenger for entertainment instead of transparent windows.  Corporate sponsored advertisements may even make the ride free for passengers.

The end product of a tested and worthy hyperloop system would drastically change policy development and enactment.  As aforementioned, the hyperloop system would be affordable, run on renewable energy, and cut traffic significantly in major cities.  If the track is completed between LA and SF, Gresta believes they would be able to replace all flights traveling between the two cities, substantially lowering air pollution and transforming the way of life for millions of citizens in California and eventually the world.
​
Unfortunately, skeptics in the world are still criticizing the project.  Much of the technology being used has yet to be tested.  However, Gresta stays hopeful saying the opportunities are endless.  He is confident that Hyperloop Transport Technologies has solved many of the original issues engineers disputed after the release of Musk’s plan in 2013.  Nevertheless, the construction of the project is starting in less than three weeks and dreamers and engineers can come together in anticipation for what the ending result may be.