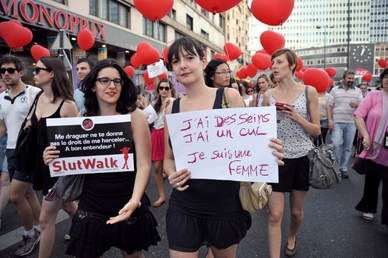 ​The response of Frenchwomen to Sandra Muller’s exposure of the sexual harassment she received by a powerful french executive with the #BalanceTonPorc movement, akin to the Harvey Weinstein exposure and the United States’s #MeToo movement, has led to the possible criminalization of verbal sexual harassment as well as increased punishment for other actions of sexual assault. This comes at a time where there has been a global shift leading to more vocalization about the transgressions of powerful men and a pushback against it.
​


​​
​As a response to the “#MeToo” movement in the United States, which was sparked by the allegations of sexual misconduct and harassment against Hollywood producer Harvey Weinstein, tens of thousands of Frenchwomen have taken to social media to share their own accounts of sexual harassment and abuse under the hashtag #BalanceTonPorc, or “Expose Your Pig.” The French movement started on afternoon of Friday the 13th when journalist Sandra Muller tweeted the inappropriate sexual advancement a powerful French executive had said to her with the hashtag #BalanceTonPorc. The exposure of the powerful executive inspired numerous other Frenchwomen to open up about their own experiences with sexual harassment for the first time in history. This signifies a shift in French culture from a cultural norm of women's silence in the face of power to a rejection of that power as an excuse.  This comes at a time where many politicians, who are elected to make and enforce laws that protect the citizens from harm, have been caught using their power to sexually harass women without consequence. This shift in cultural norms may have been because of the multitude of these exposures.
​
The chauvinistic culture in France used to promote a culture of silence for women who were victims of sexual harassment. The silence has enabled powerful men, specifically public figures, to not be held accountable for any sexual transgressions as sexual harassment was written off as “naughtiness.” This culture is quantified by a 2016 study by the pollster Ifop, which found that a meager 65 out of the 1,048 sexual harassment lawsuits in France in 2014 led to convictions. The culture first began to shift with the milestone cases of Dominique Strauss-Kahn, the former International Monetary Fund chief who was arrested for sexual assault in 2011 and Denis Baupin, the vice president of France’s national assembly, was accused by a dozen women of sexual harassment. With the United States’ women becoming more and more vocal about sexual harassment, snowballing as powerful people like the United States’ president are exposed, it seems to have inspired a culture of change. Before the two milestone cases and the #BalanceTonPorc movement, there were few notable incidents of French vocalization of sexual harassment against people of power. Muller’s statement, sparked by the Weinstein scandal, and the subsequent “#BalanceTonPorc” movement may have pushed the culture of silence in France to its breaking point.

France is now considering following in the steps of other European countries, like Portugal and Belgium, that have criminalized verbal sexual harassment with fines or the potential of jail time, respectively. France is considering proposals which include fines for unwanted sexual advances, raising the consent age, and extending the statute of limitations for cases of sexual assault involving minors. France has already taken action by stripping Weinstein of his Legion of Honor and by putting the ex-mayor of Draveil, Georges Tron, on trial for the sexual assault of two women.

These proposals would come with significant issues. France’s junior Minister for Gender Equality, Marlene Schiappa, points out that the government must define street harassment and determine how it is to be fined in order to implement a policy. There is also the issue of how to implement the policy. Would the government have to increase police presence in order to catch the perpetrator or would the victims themselves have to film the claim and provide evidence for the policy to take effect?

This movement and its shift towards legal prosecution is important for emphasizing the shift in not only France’s culture, but the world’s culture. Women are tired of being silenced and oppressed about their sexual abuses, and are taking to social media to be heard. Their message is clear: men in power can no longer get away with abusing said power towards women. This message must be spread and legalized, a difficult feat when many members of the government, such as Trump and Tron, are the ones suppressing the message.