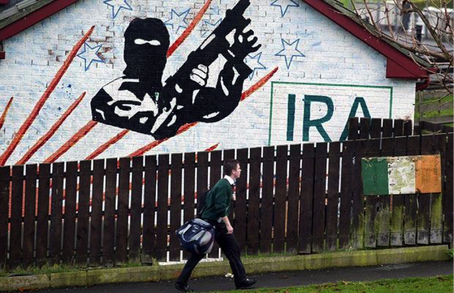 In 1998, thirty years of armed ethno-nationalist hostilities in Northern Ireland officially came to a close. The formal peace process commenced with a clear popular mandate to oversee a new era in Northern Irish history—one characterized by fairness and equality for all, democratic local governance, and non-violence between rival pro-British and pro-Irish militant factions. It seemed that the province’s warring ethnic groups, the minority Hibernophile Catholics and majority Anglophile Protestants, would embrace democratic coexistence after hundreds of years of bitter sectarian divide. But since then, Northern Irish society has been periodically forced to look in the mirror and confront an ugly face—the face of enduring sectarianism. Look no further than the annual riots provoked by unionist Protestant parades, which remind the Northern Irish that the formal peace process conceals the endurance of an informal ethnic war. The assassination of a former militant in the privacy of his east Belfast residence seems to have lit the spark for that war’s most recent battle.

When the Northern Irish press reported that a former Irish Republican Army (IRA) militant by the name of Kevin McGuigan Sr. was shot to death in what police called “a ruthless and premeditated killing” this past August, a political crisis immediately erupted. For over a month, several parties have been attempting to force the collapse of the power-sharing coalition that governs Northern Ireland, claiming that its second-largest party, Sinn Féin, is to blame for Mr. McGuigan’s execution-style murder.

They allege that he was assassinated by the Provisional Irish Republican Army, a shadowy militant group with ties to Sinn Féin that was disarmed under international supervision in 2005. Yet senior Sinn Féin officials assert that the Provisional Irish Republican Army no longer functionally exists, rejecting their rivals’ claims that they were either directly or indirectly involved in Mr. McGuigan’s killing. As law enforcement seeks to uncover the truth and the associated political crisis deepens, the people of Northern Ireland fear that their province’s decade-and-a-half-old peace will not last.

With Northern Ireland’s provincial government approaching collapse in the midst of sectarian crisis, there is no question that its peace process’ defining feature is its precarity. But the fragility of the post-civil war order must be viewed as a function of choice; after all, the Northern Irish government has failed to adopt bold reconciliation policies that may have served to avert the current crisis. These policy proposals languish in a tabled report issued by the Consultative Group on the Past (CGP), a human rights and reconciliation project that sought to enable Northern Ireland “to find a way forward out of the shadows of the past”—that is, to address the province’s culture of hurt, suspicion, and ethnic hatred.

Central to the CGP’s proposals are policies designed to usher in “a non-sectarian future” in which human rights are enjoyed by all. These include recognition payments to relatives of persons killed by militants and the creation of a Reconciliation commission to discourage sectarianism and promote socioeconomic equality among ethnic groups. Rather than just dealing with the fallout of sectarian political conflicts and shadowy paramilitary activities, the CGP would endeavor to kill the roots of sectarianism itself by ensuring that the human rights of all Northern Irish citizens are respected. There is reason to believe that the CGP’s bold vision of society-wide reconciliation for Northern Ireland is within reach; similar projects, including South Africa’s post-apartheid Truth & Reconciliation Commission and Institute for Justice and Reconciliation, have been hailed as stunning successes.

If Northern Ireland does not take bold action to quash sectarianism and defend the rights of all its citizens, then the current political crisis will surely not be the last. Mr. McGuigan should not be remembered as just another poor soul who lost his life to a de-facto ethnic war that seems to have no end. Rather, his death should serve as a call to action for Northern Ireland to reconsider adopting the CGP’s proposals, which would facilitate further society-wide reconciliation. Only by purging the demons of its sectarian past can Northern Ireland attain a true and lasting peace.