Democracy At What Cost? U.S. Interventionism in Venezuela 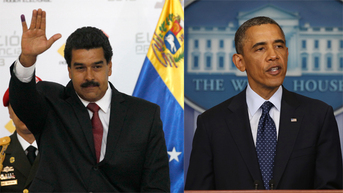 In March 2013, the iconic anti-American leader, Hugo Chavez, passed away. Before his death, Chavez had chosen Nicolas Maduro as his successor, who ran against Henrique Capriles Radonski of the Primero Justicia Party in the presidential election of April 2013. In the closest presidential race since 1968, Maduro received 50.7% of the popular vote and won by a 1.49% margin. Capriles refused to acknowledge the results of the election and demanded a recount. The National Electoral Council audited a portion of the votes and determined that there was no evidence of fraud or contamination. On April 14, 2013, Maduro officially took office and was sworn in as the president of Venezuela. Capriles refused to acknowledge the legitimacy of the election, and instead claimed he would “respect the popular will.”

The Venezuelans have democratically elected their leader. It may very well be the case that Maduro is exercising his power without the will or consent of his people, but U.S. interventions in the Venezuelan government takes the contested issue of legitimate democracy in the Maduro presidency and turns it into an unquestionably clear violation of the self-determination that a sovereign nation in pursuit of democracy must rightfully claim. We should pause and consider the fact that “there's $5m in the 2014 US federal budget for funding opposition activities inside Venezuela, and this is almost certainly the tip of the iceberg – adding to the hundreds of millions of dollars of overt support over the past 15 years.” American supporters of the opposition forces in Venezuela may claim that the United States must protect and further freedom and democracy in every part of the world. Perhaps they forget that democracy is a process; it is a way of thinking about the world cultivated only through practice and experimentation and inevitably, through many failures. The U.S. cannot “support freedom and democracy” by interrupting the important trials and errors that currently trouble the People of Venezuela. The People must fight for and overcome what they believe are injustices and violations of their basic human rights in order to truly appreciate what we ourselves have learned through our own bitter struggles against government. Democracy is not a gift that can be given by one nation and gratefully received by another. Democracy is grown, not built.

The U.S. “regime change” foreign policy has stirred global anti-American sentiment. The list of US involvement in Latin America includes opposition support against President Lugo of Paraguay in 2012, President Manuel Zelaya of Honduras in 2009, the 2002 coup d’etat during the Chavez presidency, and current president Maduro in 2014. Regardless of the material benefits and geopolitical security that these foreign policy measures may provide our country, we always question the wisdom and propriety of “Washington’s efforts to reverse the electoral results of the past 15 years in Latin America.”

We must always question what values, friendships, and footholds we forfeit in exchange for strategic economic and political gains, which are too often reshaped at the expense of Latin America, especially today in Venezuela. With reports of Chinese investment in Venezuelan oil exceeding $28 billion USD in addition to “a deal to loan Venezuela US$5 billion for development, and...US$390 million for a new port,” it is clear that the national interest of the US is on the line. Nonetheless, the United States should show equal respect for those national interests that may conflict with their own.

In 2011, Maduro, who was then Minister of Foreign Affairs, made angry claims concerning U.S. policy toward Venezuela, saying, “They [the United States] are trying to intimidate us. We do not want a confrontation, but we do demand respect. We have the sovereign right to establish commercial relations with any country in the world.” In 2010, the U.S. expelled the Venezuelan ambassador, Bernardo Alvarez and the U.S. currently has no ambassadors in Venezuela. Recently, both the Obama and Maduro administrations have expelled foreign diplomats from their countries. The U.S. should take the first step in restoring diplomatic ties with Maduro’s government by ceasing funding of opposition forces, exchanging ambassadorial representatives, and creating an open space for dialogue to reverse the mounting hostilities between the two governments.

Now is the time for the U.S. to make sacrifices that might prove costly, but surely, genuine support of democracy and freedom justifies the expense. The long history of questionable foreign policies toward Latin America can and should be stopped in 2014 in favor of a new legacy of mutual respect and political negotiation. Perhaps its time we returned to Jeffersonian-era foreign policy, in which we seek "Peace, commerce, and honest friendship with all nations." In Venezuela and beyond, U.S. interventionism must immediately become an artifact of history.