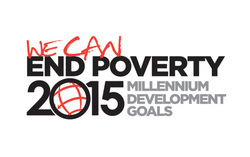 In September 2000, global leaders united to adopt the United Nations Millennium Declaration, committing their nations to a worldwide deadline of 2015 to solve pressing issues such as world hunger, the spread of HIV/AIDS, and maternal health issues. On September 25, 2008, representatives from civil society organizations, global governments, private sector organizations, and international organizations announced new national-level commitments to meet these Millennium Development Goals, or MDGs. The Goals have led to substantial improvements in public health, economic development, and political stability. However, with the deadline approaching, international leaders are pushing for greater consultations with the public and civil society in order to yield a more sustainable post-2015 agenda.

At the 2010 High Level Plenary Meeting of the UN General Assembly, global representatives met to review progress towards the Goals. The number of people living in poverty, for instance, has fallen to less than half of its 1990 level. Additionally, over two billion people have gained access to better drinking water and child mortality rates have fallen by more than 30%, with about three million children’s lives saved each year compared to 2000. Deaths from malaria have also fallen by one-fourth of its previous rate. Many scholars, noting the amount of work that still needs to be done to meet all eight goals by 2015, argue that the Goals were constructed and implemented using a very government-led or top-down methodology. They posit that the international community needs to take further action to address development locally as well as incorporate more civil society organizations and citizen voices.

International representatives made a call for a complete re-thinking on ways to catalyze implementation of the agenda beyond 2015. The United Nations community created the “post-2015 development agenda,” a priority program of new items for the world after the MDG deadline. Not only does the new agenda hope to harness more support on issues such as sustainable development and inclusive economic growth, but it works to capitalize off of the “data revolution for sustainable development” with a new global initiative to improve the quality of information on sustainable development projects and policies available to citizens. Furthermore, according to a recommendatory report by the High-Level Panel on the Post-2015 Development Agenda released this year, the agenda “calls upon the world to rally around a new Global Partnership that offers hope and a role to every person in the world.”

In addition to the agenda’s priority themes such as “Leave No One Behind” and “Build Peace and Effective, Open and Accountable Institutions for All,” a main cornerstone of the post-MDG plan is to increase the quality and quantity of regional and national consultations on development issues. For example, the African Union, UN Economic Commission for Africa, and UNDP Bureau for Africa have united for an “African Common Position” for the post-2015 agenda.

Nationally, the agenda aims to increase “national consultations on the Post-2015 development agenda” that are constructed to open the usually closed multilateral negotiations to “crowdsourcing.” The methodology is to generate input from groups and individuals on global policies and to help nations develop a unified country plan for post-2015 growth.

Many of these consultations are being done online. On September 10, 2013, the UN released a report reflecting priorities of global citizens on the post-2015 development agenda. Reports indicated that more than 1.3 million people in every single UN member state have called for various priority themes such as health care services improvement and more responsive governments. According to the Secretary-General, "this wide-ranging grassroots consultation highlights the priorities that people want to see addressed in the post-2015 development agenda.” The summary report also indicated that since August 2012, when many of these consultations were implemented, 300,000 people have openly engaged in meetings in over 90 nations on various development challenges, while approximately 1 million people have participated in digital surveys and votes.

For example, “MyWorld2015” is an online survey that was created by UN agencies to serve as a method for people globally to articulate the issues that matter most to them. According to the UN, “it aims to capture people's voices, priorities and views, so that global leaders can be informed as they begin the process of defining the new development agenda for the world.” The survey is currently ongoing, but so far, UN analysts have extracted three important citizen trends: firstly, the shared desire for leaders to complete the “unfinished business of the MDGs by providing everyone in the world access to water, food, better health care, and quality education”; secondly, improving the “management of natural resources, job creation, and security”; and lastly, addressing “inequalities” as they relate to access to public services.

While the objective to increase consultations to prepare for post-2015 is definitely sound and commendatory, follow-up on the implementation of these local, regional, and national consultations is key in order to advance from the MDG framework into post-2015. The UN claims that MYWorld will continue gathering people’s responses and that results will be shared with global leaders as they prepare the next development agenda in the run up to 2015. However, it is important that these priorities are actually followed through in the post-2015 arena.

There are a variety of other global consultation efforts for post-2015, but MYWorld is the only one that actually specifies 16 priorities instead of the open-ended question format. It is uncertain how these initiatives will be incorporated into programs moving forward, and more global development efforts must be made to ensure that this survey as well as other consultations do not just incorporate a small segment of the population. Inclusive discussions by all socioeconomic sectors of society are important moving forward, but it is yet to be seen the extent that which well-meaning consultations like these will lead to increased efforts in the poorest and lesser developing regions to ensure local assistance.