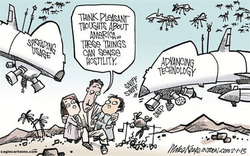 Since the end of the Bush administration and beginning of the Obama, the United States has significantly increased its reliance on drones to conduct its international military affairs. The unmanned, remote-controlled vehicles are primarily for surveillance purposes, but are also used for missile strikes. In addition to the Iraqi and Afghani theaters, the US has employed drones in Pakistan, Yemen, and Somalia. Now, with the civil war in Syria escalating and the threat of a Western intervention looming, drones may be utilized in yet another Islamic country.

Drone warfare is a contentious topic in the international community today. The populations of numerous countries express a strong disapproval of the use of drones for targeted missile strikes. Leaders of countries where the US has employed drone warfare have lashed out against the breach of their sovereignty. Critics claim drones make war “easier” and therefore more likely. The debate, which perhaps reached its high point over the summer with President Obama defending the use of drones in his foreign policy speech, raises numerous moral and legal questions surrounding drone warfare.

Amongst these questions is one that explores the sort of precedent the United States is setting by using drones to strike other countries. As it currently stands, the US, being the most advanced and powerful country in the world, effectively has a monopoly in drone warfare technology. Since there is a general lack of international regulation for drones, what the US does with its armed drones will tremendously influence the development of the norms surrounding their use. When other countries inevitably develop their own strike-capable drones, they will look to the US drone program as a guide for acceptable drone usage. With the way the US currently uses drones in its war zones and in sovereign areas it declares to be a failed state (parts of the Federally Administered Tribal Areas in Pakistan, Yemen, Somalia), other countries will find it easy to justify drone usage for their own geopolitical interests.

American political leaders should realize the long-term effects their maverick drone program will have. The manner in which drones have been used for the past decade or so have made it key that they are regulated. Unregulated drones could have extreme consequences on the nature of war in the 21st able to weaponize them. The US, rather than exploiting its monopoly on drones by unilaterally employing them for its own interests, should lead a drone control program in the proper international institutions. The valid use of drones should be mandated by international law so the increasing numbers of actors who have access to them have some standards to uphold in their unmanned military ventures.

The lack of international regulation for drone warfare makes drones a potentially great danger in the coming future. Drone warfare has already developed into a polemic issue, and will continue to be so until some standard is set to govern it. Perhaps before leading an intervention in Syria based on the regime’s violation of international law concerning chemical warfare, the US should consider a world with laws limiting the scope and magnitude of drone warfare.