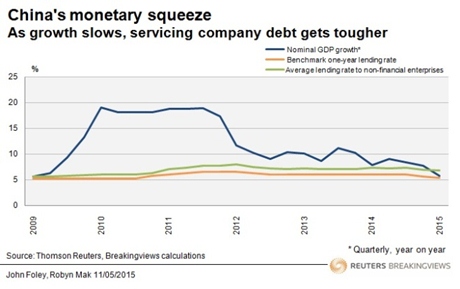 In mid-October, the People’s Bank of China lowered national interest rates for the sixth time in a year. Earlier in the month, Chinese government officials contended to reporters and international leaders that the economy has been largely revived, and is again mounting on a prosperous path. At the same time authority members announced that the Chinese economy saw a positive growth of 6.9% in the third quarter, which is substantially ahead of market expectations, China’s Central Bank spurred to instigate urgent economic growth.

Many countries, including the U.S., view China’s lowering of interest rates as a clear indication that China’s economy is still in a deteriorating and volatile state. Moreover, the Chinese government appears to be aware of that, through the numerous incidents of rate reduction. The Chinese market is not as stable as the government strives to convey.

On October 23rd, in response to another series of stock tumbling, the People’s Bank of China lowered its one-year lending, deposit rates by 25 basis points to 4.35 percent. Additionally, the reserve requirement ratio was decreased by 50 basis points to an all-time low of 18 percent.

In fact, China has been experiencing some turbulence this year. Nominal growth for China has declined to 6.2%, its weakest performance since 1999, ensuing in weak cash flow for companies already facing heavy debt burdens. In particular, the industrial sector has been significantly impacted, with the country's Northern Rustbelt on the brink of a recession. More than a percentage point of overall growth in the economy this past year was brought about by activity in the financial sector, a contribution that is predicted to soon diminish because of the stock market collapse this summer. Many analysts postulate that real fiscal growth is around 5-6%, substantially shy of the government's 7% target.

The rapid process movement of urbanization in China during the late 1900s caused a shift of workers from the traditional, agrarian sector to the industrial and private work force, a process that led to the rampant expansion of China’s market. Nor, the surging resource of new workers in the city has slowly become drained, ensuing in a renewed economic bottleneck.

In order to move out of the fiscal quagmire in which China is currently caught, Chinese leaders need to end their increasing dependency on the central banks. This would help implement government programs aimed at shoring up growth, in a process referred by counterparts abroad as “quantitative easing.” In a statement posted on the central bank’s website, the People’s Bank of China attributed the measures taken in its attempt to remedy the economy to what it deemed as downward pressure on the declining economy.

Additionally, the Chinese government should consider investing more in private businesses. Rather than directly investing national funds in bankroll projects, or projects that can efficiently generate revenue proportional to the amount invested, the People’s Bank of China has been putting money into state lenders known as policy banks, with the primary purpose of financing government-backed programs. In other words, these banks are aiding a government fund that is seeking to stabilize prices. In the long run, this poses danger to the government’s ability to generate lucrative revenue and receive substantial profits from the market.

Given China’s increasing importance in the global economy, especially its surge as the world’s second largest economy in recent years, China’s fiscal instability could pose major risks far beyond its borders. The Chinese government must reassess its strategies for combatting China’s economic downfall, end its dependency on the Central Banks, and making positive-revenue investments. China is the largest foreign holder of U.S. Treasury securities, a prominent trade partner of the U.S., Japan, Brazil and Australia, and a major player in the intra-Asian trading system. Put simply, the Chinese government carries a lot of weight as it realigns its focus to ameliorate the faltering market.