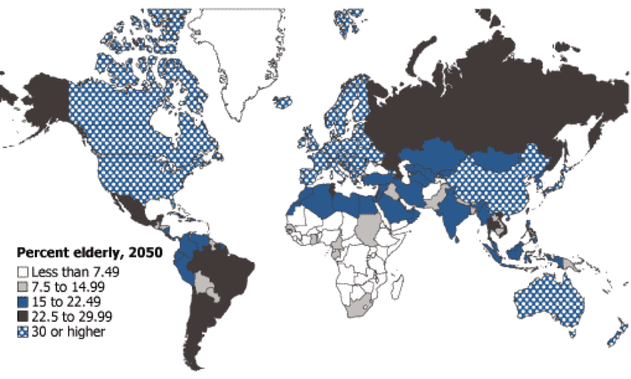 ​In 1950, people aged over 65 or above represented 5.1 percent of the world population. In 2015, the figure goes up to 8.1. In 2050, according to the projections of the United Nations, this percentage is going to reach 16 worldwide and an impressively high 25.8 in high-income countries --- more than one out of four. As the statistics indicate, the world population is aging at an unprecedented rate.

It might be helpful to first have a look at where this phenomenon comes from, whether it is a natural product of development or a consequence of political decisions and interferences and whether it is temporary or lasting. Firstly, the trend of fertility decline is one of the main factors. From 1950 to 2015, fertility (children per woman) almost halved worldwide, from 4.96 to 2.51, and is projected to hit 2.25 in 2050. As the proportion of young people decreases, it naturally pushes up the percentage of the elderly. Secondly, people are expected to be healthier and live longer with developments and improvements in medicine and biological technology. In 2020, life expectancy at birth is expected to reach 71.66 years, and is still expected to increase to 77.06 years in 2050. Additionally, the trends and compositions of population are also shaped by politics and policies. For example, while World War II reduced population sharply, the following baby boom created a boost in the number of retired people decades later. Population policies also interfere with the natural process of population growth. One of the examples is the controversial only-child policy started in early 1980s in China, which significantly distorted the ratio of different age groups in the country. With fertility expected to keep decreasing and life expectancy predicted to keep growing, the aging of world population is a lasting challenge for generations to cope with.

This unprecedented phenomenon has significant economic implications. The change in the population structure of a society alters its ratio of consumption and production. According to a report by the Certified General Accountants Association of Canada, in 2005, there were about 19 retirees for every 100 workers in Canada. The elderly dependency ratio (the ratio of older dependents--people older than 64--to the working-age population--those ages 15-64) is projected to rise by 2030 to 39 retirees for 100 workers and by 2050 to 44 retirees for every 100 workers. In the United States, the ratio of people 65 years and older to those between 20 and 64 years could double between 2013 and the middle of the century. Worldwide, the old-age dependency ratio (ratio of population aged 65 or above per 100 population 20-64) in 2000 was 12.7, while the estimation of this number for 2050 is 28.7. As more people are enjoying retirement, the pressure on the labor force increases. To meet the needs of the society with less labor resources, societies need to either improve the productivity or expand the recruitment of the labor force. Pensions are also growing burdens that can impede future economic growth by using up funds that could have been put into investment. In addition, the need for resources put into healthcare and medical services is also on the rise.

Extensive discussions about how government should face these challenges have been going on in recent years. Delaying retirement and helping older workers to stay in the labor force longer can be one of the options. This extends the length of the economically active period in a person’s life, which makes sense as the life expectancy is growing and health condition is improving. However, the policy faces controversy. Some people worry about its negative impacts on the younger generations who try to start their careers when older workers hold on to their jobs. If the younger generations can not have enough opportunities to develop their skills, it might cause “talent shortages in an already small generation”. Some other research results counter this theory, showing that “there is no evidence that increasing the employment of older persons reduces either the job opportunities or wage rates of younger persons.”

Another way to strengthen the labor force is to bring in specific groups that are underrepresented in the labor forces, including women and minorities. In 2013, females aged 15 and older only make up 39.6 percent of the labor force worldwide, with a labor participation rate (the ratio of economically active females aged 15 and older to all people who supply labor for the production of goods and services) of 50, compared with 77 of males. In the United States, unemployment rate varies considerably by race and ethnicity. In 2013, among the largest race and ethnic groups, African Americans have the highest unemployment rate of 13.8 percent, while Asians and whites have the lowest unemployment rates of 5.2 and 6.5 percent, respectively. Different groups are underrepresented in the labor forces for various reasons. To bring them in, it calls for more policies to remove their respective barriers. For example, to bring more women into the labor force, childcare service is in need. To include minority groups, providing training and education opportunities might be a reasonable idea. While 59 percent of Asian labor force aged 25 and older had a bachelor’s degree, the number for African Americans was only 27 percent. Education opportunities can at least equip minority groups with competitive skills needed to get employed.

Last but not least, since one of the factors contributing to the aging of population is the declining fertility rate, governments can put efforts into raising the reproduction rate. However, this is easier said than done. Many countries facing serious challenges of population aging have already tried to do so, but the effects are not as effective as expected. Gauthier’s research shows that popular measures such as financial transfers and childcare coverage indeed have some impacts on fertility, but the effects are more “on the timing of fertility rather than the completed family size”. The decision of how many children a family wants to have depends on many factors such as the family income, the cost of raising a child, parents’ education and family background, etc. While policies can affect some of these factors, it is hard to generalize which factors are more influential. Also a considerably long gap exists between a child’s birth and his/her entrance into the labor force, so the impact can only appear and be evaluated after a long period of time. Policies to raise reproduction rate can also become problematic if it leads the society to another extreme---overpopulation. Therefore, even though this method is more fundamental than others mentioned above, it is also harder to put into practice.
There is not one single perfect policy for countries to cope with the economic challenge of the aging population, and the effects of different policies are very complex and also not easy to predict. Further exploration and research of policies are definitely called for to shed some new light on this issue.