Education Based in Rigor 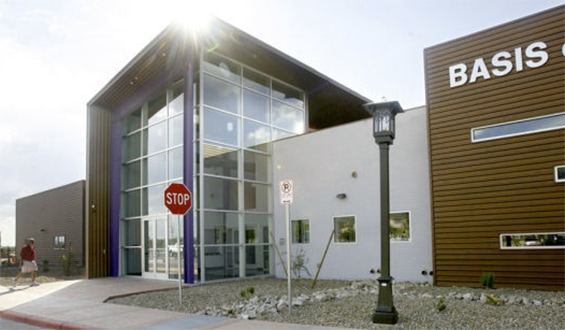 ​There are 24 BASIS schools, the first of which was founded in Tucson in 1998 by Michael Block, Ph.D. and Olga Block, Ph.D. The schools outperform the top school systems around the world, including China, South Korea, Finland, etc. U.S. News & World Report ranked both BASIS Tucson, Scottsdale, and Oro Valley (the only three BASIS schools that have a long enough tenure to be qualified for rankings) as three of the top six schools in the country. Some BASIS schools are publicly funded charter schools while others are independent schools with tuitions upwards of $27,000.  The Arizona BASIS charter schools differ from the independent branches in that there are no admissions requirements. However, both types of BASIS schools have a lot in common; the same standards for excellence- students should be completing hours of homework per night, should ace 6 APs by their junior year, should pursue an industrious senior research thesis, etc. If students perform well, the teachers, which are all unionized, at BASIS schools receive bonuses.
Some of BASIS’ functions such as hiring and maintenance operations are run by a for-profit management company, which has led people to condemn the lack of financial transparency. Public schools complain that through its for-profit functions, BASIS is cherry-picking the top students in order to save money in educating special-needs students. However, this claim directly contradicts the fact that BASIS does not have admissions requirements in its public schools. Some believe that BASIS is cutting costs beyond students’ welfare, however BASIS counters that they have better oversight and accountability and should be judged based on their students’ stellar academic results.
Critics also point out that BASIS has high attrition rates (senior classes are anywhere from a third to 25% the size of 5th grade classes) and contend that BASIS has excellent test scores largely because they phase out underperforming students. In 2013, the D.C. Charter School Board dismissed a request from BASIS DC to expand, stating that the high dropout rates were alarming. That should not be a problem for BASIS’ model because all rigorous schools with top academic standards have very high turnover. BASIS gives students the tools to learn and if they can’t use them in a dedicated manner then they don’t belong in their high achieving environment and there is nothing wrong with that.
One unique aspect of BASIS’ curriculum are its “connections” classes, which take an actively interdisciplinary approach to education. In 2nd grade, students mix engineering, a kids story, and Mandarin. They watch the "The Three Little Pigs" in Mandarin and then have to build a house for the pigs to overcome the "huffs and puffs" of the "big bad wolf. The students try build the best structure to remain steady against the gusts of a fan and then present their data/conclusions in Mandarin.
BASIS schools represent the very best of charter schools, a standard the Secretary of Education, Betsy Devos, should follow. Unfortunately, her past support to parochial schools and organizations such as the right-wing Christian “Foundation for Traditional Values” shows that she will bring church and state together at the expense of public and charter education. Devos has her expressed her desire to advance “God’s Kingdom” and has given tens of millions to these kinds of Christian groups, nearly half of her total philanthropy.