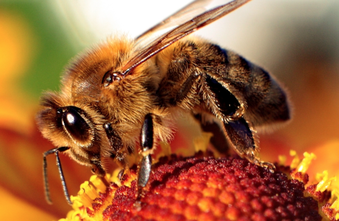 Seven species of bees have been recently added to the endangered list for the first time. Researchers from Cornell University have demonstrated the significant impacts of modern agricultural practices on the declining bee population in the U.S.
For the first time ever, bees have now been added to the endangered species list. This declaration that the bee population is drastically declining has forewarns an ecological impending disaster. The seven species of bees are native to Hawaii: Hylaeus anthracinus, H. assimulans, H. facilis, H. hilaris, H. kuakea, H. longiceps, and H. mana. The decline of these species are due to human industrial activities, loss of habitat, and usage of pesticides.
Hawaii may not be the only state to have endangered bees. All over the U.S, bees are declining at an alarming rate.  Some states may actually exacerbate this issue. In March of 2016, Massachusetts lawmakers ignored a protection plan proposed by the Massachusetts Department of Agricultural Resources (MDAR) that could have revolutionized agriculture and beekeeping. The plan would have strictly regulated the usage of pesticides by solely giving states the responsibility of establishing pesticide limits. Rejection of this plan favors the pesticide industry and their limitless usage of bee-killing pesticides. Similar to Massachusetts, New York is following a similar trend; beekeepers are ignored in policy making while private pesticide companies have massively influenced lawmakers through lobbying. Last year, Cornell researchers studied 19 apple orchards in New York and the studies demonstrated that the population of wild bees significantly decreased with growing  usage of these harmful chemicals.
Over the past few decades, our agricultural strategy as a nation has moved from growing a variety of crops to cultivating row crops such as cotton, wheat, and rice. The lack of diversity  decreases the different essential nutrients that bees need to survive. Combined with the heavy unregulated usage of pesticides, our modern agricultural practices pose as a detrimental agent in the decline of the bee population
Additionally, there are sociological factors that endanger American bee populations, such as the decreasing number of beekeepers in the U.S. In the 1960’s there were about five million managed bee colonies. Today, there is about half that amount. Although the reason behind the declining population of bees is complicated, states can start at the policy level to preserve the species of bees that we currently have left. Some starting points could be a federal and state initiative to establish bee protection programs and stricter regulation of pesticides. Adopting a statewide pesticide regulation takes away private pesticide companies from uncontrolled usage.
Our evolving  society and its dependence on industrialization and produce are killing the biodiversity on earth. Bees are an essential cog in our ecological system.
Most plants require bees to pollinate and the declining population of bees directly affects the ability of plants to reproduce. The collapse of bees may also trigger the collapse of another species, which will in turn start a “butterfly effect” . Additionally, the decline of bees directly affects our lifestyle. One-third of the food we eat are produced from pollination. For example, without honey bees, the following foods would not exist or would have reduced yields: apples, coffee,  avocados, watermelon and other common fruits and vegetables. These foods are a common part of our daily lives and it is astonishing how an organism that is the size of a paper clip can heavily influence not only the ecosystem but also us as well.