Enough is Enough: 5 Reasons Why FGM Needs to End 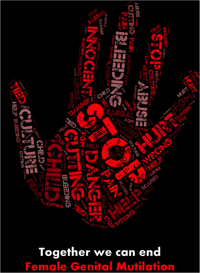 Female Genital Mutilation, or FGM, is defined by the United Nations to be all procedures that involve the partial or total removal of the external female genitalia, or other injury to the female genital organs for non-medical reasons. Cultural practices cannot be used as reasons for putting girls and women in life-threatening situations; however, FGM can only be addressed if it is handled in a sensitive and understanding way.


​
There are four major types of FGM:

Type IV — All other harmful procedures to the female genitalia for non-medical purposes, for example: pricking, piercing, incising, scraping and cauterization.

1. It is a violation of human rights and the goals of the international community.
The practice is a violation to the rights of girls and women, disregarding their rights to health, security and physical integrity, to be free from torture and cruel treatment, and their right to life when the procedure results in death.

2. FGM promotes gender inequality.
This practice engenders structural discrimination, in which many women feel that FGM is necessary for male approval and societal acceptance. If the wider community awards the practice, the likelihood of a family choosing to abandon the practice exponentially decreases. Links between FGM and a girl’s coming-of-age and marriageability are also widely accepted, with there being gift-giving and celebration surrounding a girl’s purity. Even when girls or women may fear the procedure, the overruling trepidation regarding the ostracism and stigmatization overpowers any resistance.

3. There health risks are high and the health benefits are nonexistent.
The costs of the procedure are innumerable. Beyond severe pain and perinatal risks, the 200 million girls and women in these societies are also in danger of HIV, infections, and death. With many of these women keeping this practice underreported and private, they do not seek medical assistance.

4. It causes permanent physical damage.
Though the extent of the physical damage can vary, the effects on a girl’s or a woman’s body can be irreversible. Because the practice is usually done in secret, it is typically done in a place that is unclean. If the tools are also untraditional, such as knives, sharp or broken glass, or razor blades, the initial cutting can be violent and scar-inducing.

5. The emotional trauma is severe and often irreversible.
The issues surrounding the practice of FGM are intertwining, longstanding and difficult to navigate. One aspect of the issue that is the least commented upon is the emotional trauma that those affected face. With many women now coming forward with their testimonials, it is clear that the United Nations & supporters of the movement to end FGM has made significant strides.

The greatest issue that has prevented the eradication of FGM is that, despite condemnation from nations’ governments in which FGM is culturally prevalent, the enforcement is poorly executed. Many continue this practice and remain uninformed, and thus untrained & uneducated women believe in the necessity of this practice. The girls and women subjected to this treatment without knowledge, context, or consent are left void of infrastructure that would allow them to voice their feelings of confusion, fear and dehumanization. In order to stop FGM, the international community must talk about this topic in order to mobilize more forces and gain mainstream media attention. When cultures are faced with coalitions of international nonprofit organizations, political and religious leaders, the media, civil society and the medical corps working together, they will begin to allow unheard voices to be expressed and more towards positive change.