Evacuations Near Lake Oroville: What They Reveal about Society
By Ahyoung Kim-Lee 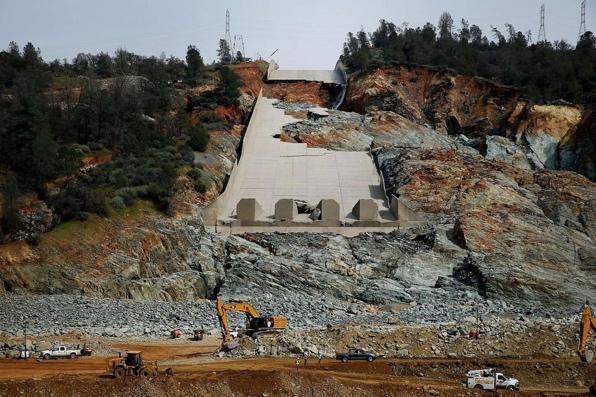 On February 12th, 2017 the California Department of Water Resources ordered the evacuation of over 200,000 people living near Lake Oroville, due to a potential spillway failure. The disaster revealed problems of inequality rooted within our society, and shed light on governmental passivity in protecting residents.

On February 12th, 2017 the California Department of Water Resources ordered the evacuation of over 200,000 people from residential areas surrounding Lake Oroville. The evacuated counties, which included Butte, Sutter, and Yuba Counties, lie in the Sierra Nevada foothills around 75 miles north of Sacramento. Lake Oroville, a reservoir formed by the Oroville dam, provides various services such as flood control, hydroelectric power, water storage, salinity control in the nearby river delta, and recreation. ​

However, the especially rainy months of January and February, coupled with the runoff from the surrounding mountains, increased the water reservoir's water levels towards capacity, therefore motivating dam operators to release reservoir water via the main spillway. The increased flow of water over the main spillway aggravated and eroded the hillside, prompting the utilization of the secondary emergency spillway. On the 12th, dam operators discovered a hole forming in the hillside due to water overflow from the emergency spillway, and feared that the concrete top of the spillway might lose its integrity, sending a disastrously large volume of water downstream.

During the two-day evacuation period that ensued, dam operators plugged the hole with rocks and released water down the spillways until no more water was spilling downhill, therefore momentarily calming the potential catastrophe. Officials predict that the costs of repairing damages could reach $200million.

The evacuations due to the compromised infrastructure at Oroville Lake emphasize structural societal problems. First, the process of evacuation revealed the inequality between residents at different ends of the socioeconomic spectrum. The news of evacuation, sent out via smartphones, televisions, and radios, did not reach homeless people who did not have access to these channels of communication. One homeless person was only alerted to the evacuation when panicked residents ran by yelling “Get out now!". While, those with methods of transportation and a place to evacuate to made a quick and direct escape, the homeless were forced to wander and hope that they were at a high enough elevation to avoid the potential flooding. In order to mitigate this inequality, methods must be implemented to ensure that all residents will be alerted to important news. Expanding the channels of communication, such as the installation and usage of speakers along the street could provide a possible solution.

Another question concerns whether the government should have been more proactive in maintaining the infrastructure. In 2005 environmental groups alerted state officials to the possibility that the emergency spillway's integrity may be compromised, but the situation was probably ignored due to the high costs of repairs. As a result of the declared state of emergency, the funds currently going towards fixing the dam are from the federal government, and so the state has avoided spending money on Oroville Dam. Furthermore, a professor in construction management at California State University at Chico, Chris Souder, says that because the primary spillway was built during the 1960s, when architects were less knowledgeable on the mechanics of sound infrastructure, the spillways were relatively thin (only 15 inches). The problem is that no one took the initiative to correct this flaw in the design.
Crews have been diligently working to clean up and repair Oroville Dam and the surrounding area. Looking forward, authorities and key decision makers must act to ensure the equitable protection of all the residents that have been affected by this disaster.