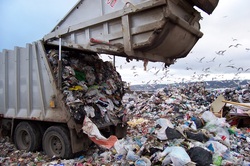 
I always blamed the deluge of fabrics in my closet on being short. My height, which has remained at a shorter than average five feet and two inches since my eleventh birthday, had always justified my accumulation of clothing and shoes; I never grow, so my clothes simply pile up. Upon unearthing an article citing Elizabeth L. Cline’s book Over-Dressed: The Shockingly High Cost of Cheap Fashion, however, I realized my over-accumulation of frocks and heels may have more to do with increasingly cheap access to clothing. This proliferation of “fast fashion,” though, has implications that extend further than my crammed closet. With an increase in the purchase of inexpensive clothing, a correlated increase in clothing disposal exists. Both of these processes, of clothing manufacture and disposal, possess serious environmental consequences.

Despite trepidations in international economic stability, fast fashion chains continue to not only flourish, but also fortify their brands. From 2008 to 2012, Forever 21, for example, approximately doubled its sale revenues from $1.7 billion, to $3.4 billion. Similarly, H&M experienced financial gains, evidenced in the approximately $4.2 billion growth in sales revenue from $14.59 billion in 2009 to $18.82 billion in 2012. Thus, with consistent growth in sales, even among a period of economic instability, fast fashion chains appear to be a permanent and forceful fixture in our capitalistic society. Accordingly, the proliferation of the manufacture of cheap fashion coincides with the increased disposal and waste accumulation of outdated and damaged clothing.

Environmental repercussions, however, materialize as a result of the constant and pervasive fast fashion cycles of purchase and discard. Initially, eco quandaries emerge in the manufacturing process of fast fashion production. The cultivation of fibers significantly contributes to pollution. Many agricultural fibers depend heavily upon herbicides, fertilizers and insecticides. A reduction in biodiversity and nitrogen fixation, decline in pollinators, and insect pesticide resistance all result from pesticide use. Another troubling aspect of pesticide use is that over 98% of sprayed insecticides and 95% of herbicides reach an unintended destination.  Thus, pesticides directly cause soil, water and air pollution. As one of the most prevalent and versatile fibers utilized within the clothing industry, cotton crops, for example, account for about ¼ of all the United States pesticide use. This fact becomes even more startling when considering that the United States is the largest exporter of cotton in the world. Environmental issues aside, pesticide utilization additionally endows the international community with a plethora of health concerns; ailments such as neurological disorders, birth defects, fetal death, neurodevelopmental disorder, lymphoma and leukemia are linked with exposure to pesticides.

Similarly, the creation of synthetic fibers involves the dissemination of environmental pollutants. The process of synthetic fiber manufacture necessitates a large amount of energy, typically in the form of crude oil. This creation consequently results in deleterious emissions, such as volatile organic compounds, particulate matter, acid gasses, like hydrogen chloride, which reach the water and air supply. All of these emissions cause aggravate respiratory disease, in addition to environmental pollution. By way of illustration, the synthesis of polyester requires petroleum, and causes the emission of volatile monomers, solvents, and other hazardous by-products into wastewater. Furthering evidence for the growth in the clothing industry, especially within the fast fashion sector, is the fact that within the past fifteen years, demand for man-made fibers, particularly polyester, has approximately doubled.

After the initial production of the fiber, the chain of production for items within the fashion industry produces eco-hazardous actions. Very simply, shipping materials accumulate solid waste, while the transportation of these products accrue gaseous waste in the form of greenhouse gases. This cyclic chain of pollution continues throughout the entire manufacture and creation process and into the very sale of the products in the store.

While demand for these fast fashions continues to increase, more and more clothes are absorbed into the realm of trash; people buy new clothes, and then throw away the old. Correspondingly, increasing discard of clothing and household textiles severely aggravates the ecosystem. In North America, textile waste accounts for approximately 12 million tons of waste a year. In other words, 68 pounds of waste per household per year are being generated within the continent. Although many citizens donate clothing for charitable causes, such as Goodwill or Salvation Army, only 20% of clothing donations enter thrift shops. Many pieces of clothing are sold to textile recyclers for repurposing, but a significant amount of clothing products are simply being thrown into the landfills.

If environment and health scares do not conjure enough abomination for the growth of the fast fashion market, social concerns may inundate consumers’ repugnance. A large reason fast fashion companies possess the ability to maintain such low prices is because labor during the manufacturing process is outsourced to developing countries. These manufacturing plants often experience accusations of child labor, unfair worker compensation and unsafe working conditions.

Solutions, or at least partial remedies to the onslaught of detriments caused by fast fashion businesses, nonetheless, do exist. In general and simple terms, a cultural conversion back to more expensive and higher quality clothing provides a resolution. If individuals value and care for pricier clothing, the need and desire for more trendy and disposable clothing may dissipate. Cline, in her book, Over-Dressed: The Shockingly High Cost of Cheap Fashion, suggests reviving the tradition of sewing and mending, thereby fortifying the concept of quality clothing maintenance. Within a capitalist and materialistic society, however, this idealistic outcome is difficult and unlikely. Therefore, solutions encapsulating enhanced disposal of fashion items may apply more efficient answers to environmental problems. Enhanced textile recycling techniques should be researched and implemented on a global scale. Eradication of fast fashion’s eco-destruction may be derived from innovative ideas, such as biodegradable clothing and accessories. Companies such as Puma ad PlusMinus, for example, have been working on the creation of biodegradable shoes, which would alleviate concerns of disposal.

While the production, distribution and disposal techniques of the industry players carry much of the shame for the negative consequences of fast fashion, consumers ultimately bear the blame. Until society realizes that rapidly following trends and rotating closets is not only unnecessary, but also harmful to the environment and society, the prospect of change seems an incomplete and distant vision. Even as I research, write and edit this article, I wince at the thought of forsaking my shopping habit. The real solution, therefore, lies in transforming society’s psyche.