Fuels of the Future… But Maybe Not the Future We Expected 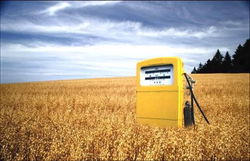 
Biofuels have not lived up to what they said they would - not even close. Instead, the public has born witness to issue after issue with biofuel production, processing and transport. These results have dampered the hopes for improved renewable technology that both stimulated job growth and sequestered carbon. The technologies that President Bush said would allow us “to become better stewards of the environment” and “help us to confront the serious challenge of global climate change” have fallen far short of their promise.

People had high hopes on biofuels, especially for their carbon sequestration capabilities, their job stimulating potential and the possibility that they offered to switch to domestic fuels. But as we’ve discovered, biofuels have many flaws. For example, there is debate that the total energy used to make biofuels, from the cultivation of biofuel crops such as corn and sugarcane to the processing plants that ferment the biomass into cellulosic ethanol, can sometimes use the same or greater than the amount of energy that the biofuels produce. Large-scale production of these biofuel crops involves processes like Haber-Bosch nitrogen fixation, and industrial agriculture, neither of which have proven to be particularly environmentally sensitive or sustainable. Further, many people are frustrated that biofuels may just be another ploy in Washington by lobbyists advocating for ‘Big Ag’ and new technologies. As of October 21st, the USDA committed to investing another $181 million for further development of biorefinery projects. But it is important to distinguish that while the country has spent huge amounts of money on bioenergy, it is only in regard to biofuels, not other forms of bioenergy.

But investment in biofuels should not be the only place we put our money, as biofuels are not the best technology we could find. This is because the process of producing ethanol is not especially efficient. To make ethanol, huge amounts of cellulosic materials (such as sugar-rich corn in the USA and sugarcane in Brazil) are transported long distances to regional factories. The biomass is fermented with anaerobic bacteria and the ethanol alcohol that is produced is energy-dense enough to be used as fuel. The method involves industrial-scale production machinery with accompanying financial and environmental costs. Even as a product, it is not as efficient a source of fuel as gasoline and oil.

Since there are so many issues with ethanol, what are our other options? That’s the catch, as there may not be many. The biggest competitors for ethanol today in the USA are fracking, oil, coal and renewable energy sources such as wind farms, solar panels and tidal power. While renewable energy technologies are always preferable, they are not always economically viable, they often require huge initial investments and offer little flexibility once in place. Fracking, the process of fracturing rock for natural gas deposits is environmentally destructive, and while it is domestic - one of the major boons for alternative energies - it comes at yet-unknown costs. Oil is non-renewable and non-domestic and coal, another domestic alternative, is known almost ubiquitously as one of the most environmentally damaging sources of energy available.

After exhausting other options, we return to Bioenergy? Even with its inherent problems? Yes. And the reason I return us to biofuels is because we are not approaching bioenergy the right way. Until this point, our policies have been aimed towards using biofuel as if it is the only bioenergy that exists, but there is more to bioenergy than just ethanol. Bioenergy goes beyond biofuel, to refer to the burning of biomass for heat and electricity. This shift in the way we approach bioenergy can greatly alter the process and its associated impacts.

While biofuels are accused of being inefficient, bioheat refers only to the harnessing of heat from biomass combustion and has been shown to be up to 2 to 4 times more energy, because energy is not lost in the production of fuel. Bioheat is at an advantage, but there are hidden benefits of switching to bioheat. They can be found especially in the associated potential change in agriculture: the plants we use in bioenergy can change as well to fit the needs of bioheat. Because bioheat energy does not need to break down sugars, as is necessary in the alcohol fermentation processes of biofuels, it can consume biomass that is not as sugar-dense. These more flexible requirements mean that the kinds of crops we cultivate can and should change drastically to ones more adapted to their cultivation climates and their nutrient needs.

Sugarcane, the number one ethanol crop in Brazil, and corn in the U.S.A. are both cultivation intensive and nitrogen hungry. But native plants like switchgrass, and less nitrogen-dependent plants such as Miscanthus offer innovative solutions. Miscanthus, in particular can grow up to 30 feet tall in some parts of the U.S.A. and up to 10 feet in the relatively difficult growing climate of the Northeast, all while using very little nitrogen from the soil, a critical nutrient in plant growth. The low nitrogen requirements mean that there is less input of manufactured fertilizer needed, and that Miscanthus is easier on the soil. Other crops such as native switchgrass can grow very well in the Northeast as they are well-adapted to the ecosystems in existence. These may provide dual ecosystem benefits beyond just being energy crops, by becoming seasonal habitats for migratory animals and providing valuable cover-cropping functions when used in rotational cropping systems.

One of the major drawbacks of bioheat systems is that the energy that it produces is non-transportable. Unlike biofuel, bioheat requires huge amounts of raw biomass. However, there are some solutions to this such as boiling down biomass into pellets. Even better, though, would be to accept that biomass is not the most transportable substance and to build small-scale production facilities around that. Because bioheat is essentially heat production, it can be used to heat buildings or transformed to electric energy, and the technologies involved are not nearly as complex as those for creating biofuels. The heat harvesting is consistent with wood stoves that people have been using for centuries, and many systems have shown that bioheat is actually utilized most efficiently when it produces both heat energy and electricity.

Bioheat is simpler, more sustainable and more effective. It still stimulates economic growth and it may provide valuable ecosystem services. It promotes energy independence and ultimately, much like the local food movement, encourages community development. However, the shift from a focus on biofuels to an emphasis on bioheat is essential to making bioenergy feasible. First, as a nation, we must admit that we were wrong. Biofuel is not our future. Bioenergy may be. Renewable energy definitely is. Ultimately, if we want to move forward, we must move on.