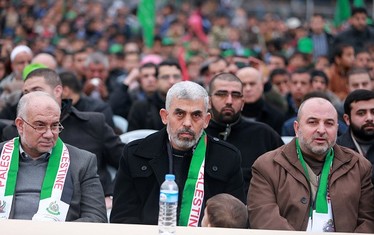 The Palestinian majority party and terrorist organization, Hamas, elected Yahya Sinwar as their new political leader–– leaving many wary as conflicting opinions have arisen over what his election means for the future of the Israeli-Palestinian conflict.


The Palestinian majority party and terrorist organization, Hamas, elected Yahya Sinwar as their new political leader–– leaving many wary as conflicting opinions have arisen over what his election means for the future of the Israeli-Palestinian conflict.

In 1987, Hamas started off as an offshoot of Egypt’s Muslim Brotherhood. By 1992, the organization consisted of two wings, the political social service wing (dawah), and a military wing (the Izz ad-Din al-Qassam Brigades). The first wing is devoted to charity and rooting itself within the Palestinian community, while the latter is a unit responsible for defending Gaza from Israel––although they have taken this duty much further than mere defense, utilizing suicide bombings and the unnecessary killing of civilians. Hamas politicians have argued that the political group is a completely separate movement from the militant group. However, this has become a very difficult argument to justify, because for the first time, the political sector has elected as their leader a Brigades cofounder and former leader, Yahya Sinwar.

Yahya Sinwar was born in 1962, in Ghaza’s Khan Yunis refugee camp. He was an avid member and activist of Egypt’s Muslim Brotherhood, and was also a part of the original generation of Hamas members. He went on to cofound the Izz al-Din al-Qassam Brigades, where he started off his career in the security branch. He found no issue with expressing violence, as his job was to brutally punish those Hamas viewed as sinners, and murder Palestinians who were suspected of sympathizing with the Israeli government.  In 1988, he was held accountable for his actions and sentenced to four life sentences in Israeli prison. However, in October 2011, Sinwar was released with over a thousand other Palestinian prisoners in exchange for the Israeli soldier, Gilad Shalit, who was captured five years earlier. In testament to Sinwar’s stubbornness, he was adamantly against the prisoner exchange, despite being one of the top Hamas leaders released.

Sinwar returned to Gaza to work for the Hamas political bureau, and quickly maneuvered himself up the ranks. Rather than taking the violent approach one might expect from a former militant, he instead took an extremely diplomatic approach. His view on prisoner exchanges shifted, and he began working on further exchanges with Israel, and additionally conducted negotiations with the rivaling Egyptian-supported Fatah, the largest faction of the former Palestinian Labor Organization (PLO).

Many people have viewed the appointment of Sinwar as a dangerous sign of the growing tension between Israel and Hamas. The Israeli education minister stated violent confrontation between the two was a “question of time, not a question of if.”

However, others have argued that things will not change at all in Gaza. While Sinwar does have a military past, he also speaks Hebrew fluently, and recognizes the strengths of Israel as well as his limited abilities to force change. A Hamas leader described Sinwar as having extreme views, but at the end of the day his, “outlook is pragmatic.” The Israeli military establishment believes that rather than taking a more violent approach, Sinwar will attempt to dedicate the military to capturing soldiers as tools in prisoner release negotiations.

While it is not clear what Yahya Sinwar’s initial political approach will be, it will most likely be the prior status quo. In spite of this, it is important to remember he is a terrorist with a violent past, and when pushed to the edge, he may resort to his past methods of orchestrating attacks. A change in US foreign policy may be enough to do just that. The US will justly never be on the side of Hamas, but for the past five decades, presidential administrations have committed to a two state solution in Israel, which has been enough to give Palestinians hope of eventually having their own nation. However, President Trump recently dropped this stance, stating that he would be okay with a one state solution.

With a former militant such as Yahya Sinwar in charge of Hamas, it is essential that President Trump at least attempts to tread lightly on the issue. Statements such as the one he recently made only create more tension, and that is the last thing needed right now. President Trump needs to reassure the public that he strongly supports a two state solution, and do everything in his power to deescalate the situation in hope that no more lives are nonsensically lost to violence.