Healthcare on the Agenda Once Again in the Supreme Court 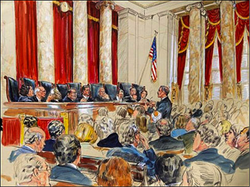 The Affordable Care Act, commonly known as Obamacare, is the most polarizing and controversial piece of legislation in recent memory. Earlier this month a section of the law has been challenged in the Supreme Court. This is the second time the ACA has been brought to the Supreme Court, the first time in 2012 when four justices, one short of a majority, voted to essentially eliminate the law. This most recent attack is less far reaching than the one in 2012. However if the Court rules in favor of the plaintiffs over 6 million Americans could lose their health insurance and the insurance markets would be in a perilous state.

The Justices in the previous case split largely on ideological guidelines and this is likely to be the case again. The Administration can draw hope from many of the questions raised by Justice Kennedy, who dissented against the healthcare bill in 2012. Justice Kennedy, along with the more liberal justices, seemed hesitant to rule the case on just a small part of the statute. Justice Kagan remarked, “We are interpreting a statute generally to make it make sense as a whole, right? We look at the whole text. We don’t look at four words. We . . . try to make everything harmonious with everything else.”  Justice Scalia, a member of the court’s conservative wing, had the opposite reaction: he favored a literal interpretation of the law rather than the intent of congress.

The debate has two different spheres; the justices are debating on a very small section of the bill and whether the legal reading should be done with a narrow scope on the specific wording or within the context of the broader bill. In addition to this legal argument there is the practical one with what would the affect of overturning the section of the law do. The justices will be very hesitant in putting the healthcare of millions of Americans in jeopardy based on such a small interpretation. Justice Kennedy pointed out that taking away the subsidies in question would put states in a tough situation of either embracing ACA exchanges or entering into a collapse of their insurance market.

I find it unlikely that the justices will put the healthcare of this many people in jeopardy over what could have been a diction error by congress. Justices Scalia, Alito, and Thomas certainly will side with the plaintiffs however; Sotomayor, Ginsberg, Breyer, and Kagan are all likely to side with the administration. That leaves Justices Kennedy and Chief Justice Roberts both of who raised serious questions during the oral arguments. With the potential collapse of much of our nations Healthcare markets, millions of Americans would find their healthcare in jeopardy. For justices on the fence about the legal issue behind the case will take actual consequences to their actions into consideration.

In addition to the legal argument there is the procedural one in which, The responsibility for interpretation of the intent and direction of the law is given to the executive branch. Only if the text were taken literally with no regards to context or common sense would the implementation be changed. Using the court for this purpose, trying to damage the ACA to damage the administration, ignores the more important issue of improving healthcare in this country. The consequences to this attack would be too severe based on the small textual technicality. The justices in overturning the statute would be taking sides on what looks to be more of a political rather than legal dispute.