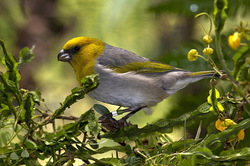 One of the rarest birds in Hawaii, the Maui parrotbill is in danger of going extinct. With their uniquely curved beaks that allow them to feast on insects hiding within tree bark, these small passerines are immediately distinctive and representative of the ecological issues facing endemic Hawaiian species today. They can only be found in the forests on the windward side of the Haleakala volcano, where they inhabit small shrubs and clusters of ferns, making them especially susceptible to outside development. In recent years, an earnest effort by local environmental scientists has sprung up to save these birds from an unhappy fate.

The reasons behind the decline of the parrotbill—also called the Kiwikiu—are diverse. Widespread habitat loss, encroachment of predators, and diseases such as avian malaria have devastated their numbers and have had similar effects on other endemic species. The presence of ungulates such as feral boar and deer, which root through the underbrush to search for food, have also wreaked havoc on the delicate Hawaiian ecosystems. In fact, one could state that the halcyon days of Hawaiian species have long since gone, considering that early explorers in the 17th century inadvertently introduced many of the problems facing native species today.

With that said, hope for the parrotbill lies in the form of reconstructing a new habitat for them in the lofty Hawaiian highlands. Their current habitat poses a problem because it does not provide them with adequate shelter in an area where high levels of rainfall mean it is difficult for parents to procure food for their offspring. A team of researchers led by Maui Forest Bird Conservation project leader Hanna Mounce is attempting to ameliorate this issue by reintroducing trees to hillsides rendered bare by excessive logging, which would provide the parrotbills with safe places to live and breed that resemble their historical range. Additionally, Mounce’s team wants to cultivate native plants such as pilo and kolea in the region to serve as food sources for the birds.

Another effort in rescuing the parrotbills is through captive breeding, a project that can be seen in action at the Maui Bird Conservation Center, where a former prison has been converted to a site of ecological optimism for endangered avian species ranging from the aforementioned parrotbills to the Hawaiian Nene, a cousin of the Canada goose. The staff behind the breeding program hopes that by slowly introducing hatchery parrotbills to the wild, they will be able to assist in propagating their species’ numbers.
​
Work has already begun on restoring the parrotbill’s habitat, and thousands of young seedlings have been planted. Increased public understanding of the Maui Forest Bird Recovery Project’s mission has inspired volunteers to make the trek up to Haleakala and assist with restoration efforts. The road to saving the Maui parrotbill can be an arduous and winding journey, but it can also be a promising one.