How the East is Won: Navigating the Turbulent Waters of the South China Sea Disputes 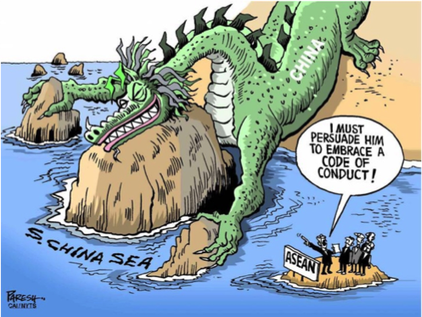 
​
After years of legal ambiguity surrounding the territorial disputes in the South China Sea, The Hague is set to rule on the legitimacy of China’s claims. It is essential to apply international law to the disputes to prevent greater military escalation. Yet, with Asia Pacific nations divided between Beijing and Washington, it will be difficult for the U.S. to gain the regional support it needs to enforce the imminent decision.


​
It seems de facto occupation of disputed territories by the United States’ former Cold War opponents is in vogue these days. And these territorial disputes are symptomatic of broader diplomatic fault lines forming on the world stage. But while the controversy surrounding Russia’s occupation of Crimea has largely faded from headlines, the same cannot be said for the Spratly and Paracel Island disputes between China and three other Asian-Pacific claimants in the South China Sea. And for good reason: ever since the U.S. declared its “Pivot to Asia” strategy in 2012, wherein greater American military and diplomatic attention will be repositioned to promote American interests in the Asia Pacific, Sino-American jockeying for regional influence has become more apparent and more aggressive. However, these two nations are each other’s largest trading partners and occupy equal positions on the United Nations Security Council, among other international governance organizations. Thus, there is still considerable ambiguity as to whether this regional competition, manifested through growing diplomatic tensions in the South China Sea, will precipitate more direct conflict, or if this is an alarmist analysis given how much both countries stand to lose if such a conflict were to break out.

In recent months, the South China Sea disputes have begun to attract greater international scrutiny because of the United States’ ostentatious flyovers and warship patrols for purposes of asserting the international right to “freedom of navigation” in the region. While China contends that they are not challenging this freedom, Washington has characterized China’s unilateral land reclamation and military infrastructure development on disputed reefs and islets as an intention to militarize the region and flout international law, which has not decided in favor of any nation’s individual claim. And with an immanent ruling later this year by an international court in The Hague over the legitimacy of China’s indeterminate nine-dashed line territorial claim, it seems that this “militarization” is increasing at an exponential pace. In fact, in the past month, China has moved anti-aircraft surface to air missiles to Woody Island, part of the Paracel Island chain, to which Vietnam and Taiwan both assert claims. It is possible that this is part of China’s grander strategic posturing in anticipation of the court’s decision in April. While the international challenge of China’s vague and all encompassing nine dashed line territorial claim was lodged by the Philippines, it also enjoys the diplomatic support of the United States and Vietnam.

Yet, the United States must tread carefully because, although it has a defense treaty with the Philippines, officially Washington does not support one claim over another, instead emphasizing adherence to the United Nations Convention on the Law of the Sea (UNCLOS) as well as regional cooperation agreements, such as the 2002 Declaration on a Code of conduct, promulgated by the Association of South East Asian Nations (ASEAN) and China. Consequently, the Obama administration has engaged in political maneuvering of its own by recently hosting a summit with ASEAN officials to make a joint declaration in support of peaceful multilateral negotiations to resolve the disputes. This summit also serves to unify ASEAN nations behind a possible Hague decision to nullify the nine-dashed line. The united political pressure behind such a decision would lend greater momentum to a legal process that the Chinese State Council deems illegitimate in dealing with the disputes. China instead prefers a bilateral dispute resolution process where it is more capable of throwing around its weight. If China were to rebuke an international and impartial ruling that received extensive Asia Pacific support, the country would effectively alienate itself further in the region as petulant and uncompromising.

However, the task of unifying ASEAN behind delineated policy is easier said than done. This is because China’s regional economic clout exerts considerable influence over the multilateral policymaking of its neighboring states in the Asia Pacific. Indeed, at the 2012 ASEAN foreign minister’s meeting in Phnom Penh, it is largely believed that China influenced the Cambodian minister’s refusal to include specific language on the South China Sea disputes in the organization’s joint declaration. Consequently, even if the United States is successful in bringing about an impactful joint declaration, a diplomatic statement is the most decisive action that ASEAN would be willing to make.
​
The United States therefore finds itself walking a diplomatic tightrope. Faced with an ever more militarized South China Sea, one of the world’s most important trade routes, Washington must show support for its allies and protect its freedom of navigation. Yet, to avoid directly challenging the expanding military reach of China in the Asia Pacific, Washington must rely on multilateral institutions such as ASEAN and the United Nations, which have weak enforcement mechanisms. And because China has been executing de facto occupation of certain Spratly and Paracel islets through deliberate ambiguity, the tribunal decision and ASEAN’s subsequent support are critical for applying international law to a quasi-anarchical military escalation. There is a possibility that China will have an extreme reaction to an unfavorable Hague decision. Thus, if this delicate balance is not maintained, the United States could find itself dragged into a dangerous regional proxy war.