How to Avoid Nuclear War: Making the Case to North Korea’s Big Brother 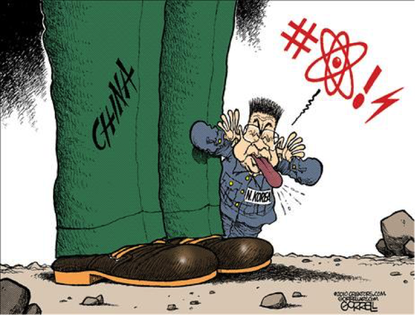 After years of an ineffective U.S. embargo to compel North Korean denuclearization, the most recent nuclear test suggests, it is finally time for a change in policy. Despite Chinese leadership’s historical reluctance to financially isolate its long-time ally, provided the right incentives, it may be willing to change course. The United States must therefore put aside its ego and make the sacrifices necessary to acquire Beijing’s support.
​
​

​
The United States has long considered North Korea to be a petulant child in need of a spanking. Yet despite the death of Kim Jong Il in 2011, and increasingly harsh global sanctions, the autocratic nation has only become more extreme in recent years. In fact, during the past few months, the central government of the Democratic People’s Republic of Korea (DPRK) has been adopting progressively more alarming actions, heightening tensions on the global stage.

The greatest preoccupation of the U.N. Security Council seems to be the DPRK’s continued development of its nuclear weapons program, despite international condemnation. In particular, over the past decade, the Council has been concerned that North Korea is developing long-range missile technology to outfit the nuclear ballistic program for which it has conducted four tests over the last decade. In the most recent test just a few months a go, the Central Government claims to have progressed toward the successful creation of a hydrogen bomb, a technology considered to be even more destructive than the atomic weapons used by the United States on Hiroshima and Nagasaki. This is unnerving considering the latest rhetoric out of Pyongyang, which affirmed that the DPRK is ready to use nuclear weapons against the United States if American policy does not change in their favor. However, the ever more provocative actions of the DPRK are pushing the United States in the opposite direction. Indeed, just this month, the Obama administration imposed extensive new sanctions against the DPRK, which drastically expand upon the already sweeping embargo against the country. These sanctions differ from past attempts at economic alienation by additionally threatening to punish other members of the global community who continue to do business with North Korea. This could mean potentially compelling China, a veritable economic lifeline for the DRPK, to greatly sever its financial dealings with the country.

How did we get here? As recent as 2008, North Korea was participating in Six Party Talks with the U.S., Japan, South Korea, Russia, and China to create a framework for the nation’s denuclearization. However, the disjointed negotiations, fiercely advocated by Chinese leadership since 2003, were repeatedly suspended due to the DPRK’s intermittent nuclear and ballistic missile testing. Finally, in 2009, North Korean leadership pulled out of the Talks after the U.N. Security Council denounced a DPRK long-range missile flight test. Later that year, after the DPRK conducted its second nuclear test, China finally took decisive action by supporting the U.N. Resolution 1874, which tightened sanctions against the nation. However, since 2009, North Korea has conducted two more nuclear missile tests, one occurring during the first Chinese leadership change in a decade.  Although this latter action prompted China to adopt increased U.N. sanctions, this was essentially a short-term, superficial solution for a long-term problem. China failed to take the next step and fully isolate its communist ally, and therein lays the greatest weakness of the U.N. Security Council’s DPRK denuclearization strategy.

To understand China’s reluctance to embrace stringent economic isolation of its eastern neighbor, it becomes necessary to recognize the geopolitical implications of a DPRK regime collapse for Chinese leadership. First, Beijing perceives American regional security strategy as one of Chinese containment, a policy left over since the Cold War. Indeed, with U.S. military bases in South Korea, Japan, Australia and Singapore, as well as a rotational military presence in the Philippines, it is easy to see the roots of this paranoia. And since the Korean War, North Korea has acted as a strategic buffer for China, keeping American troops off of its border. Consequently, China fears that reunification of the Koreas or a North Korean power vacuum could lead to that exact outcome. Second, a regime collapse would cause a security nightmare for the Chinese leadership. Setting aside the possibility of unaccounted for nuclear weapons within a destabilized country, China would also have to shelter millions of refugees flooding across its 880 miles long shared border. At a time when it is undergoing a fundamental economic restructuring in the face of lower GDP growth, this would have crippling consequences for its political and economic stability.

How then can the United States and the Republic of Korea (ROK) make a sweeping economic embargo against the DPRK attractive to Beijing? Only by allaying prevailing Chinese leadership’s fears of the potential worst case scenarios will this be possible. So far the United U.S. has primarily employed a deterrence method of coercion. However, the Iran denuclearization agreement represents a skillful combination of “carrot and stick” diplomacy, which might inform negotiations with the DPRK as well. The U.S. should present a serious proposal to Beijing for review, including offers of global engagement such as formal diplomatic recognition and inclusion in global organizations. This was similarly employed by the United States in its bilateral relations with Beijing after the Rapprochement. More importantly, the U.S. and ROK must convince Chinese leadership of the increasing instability of the Kim regime, and the ever more inevitable regime collapse given North Korea’s intensifying diplomatic extremism. In particular, if the United States makes a “hardline” policy delineation of an American-led invasion provided that the DPRK fulfills its promise to conduct an offensive nuclear strike against the U.S. and South Korea, then it will be apparent to China that the possibility of a regime collapse is more likely if it does not cooperate with the United States. Finally, U.S. commitments to military troop withdrawals on the conditions of total DPRK denuclearization would serve to address latent Chinese fears of American containment policy.
​
It is possible that complete economic embargo one its own may have the unintended effect of driving the North Korean political regime to the point of violent desperation. However, in combination with a comprehensive Beijing-backed agreement of sanctions removal, economic support and diplomatic engagement, there is a possibility of a resumption of the Six Party Talks and gradual denuclearization.