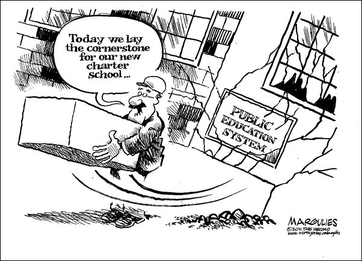 On March 16, 2017, the White House released a partial outline for the national budget plan promised by President Donald Trump. The blueprints for Trump’s budget plan feature proposals for a massive 14% decrease in allocations for the Department of Education. This would mean that the Department of Education will lose $9.2 billion in funding, the third largest loss in budget behind only the Departments of State and Health and Human Services.
This overall $9.2 billion decrease in national education spending is the end result of downsizing in various public programs and upsizing in what is known as “school choice” programs. On the other hand, the budget outline also features a proposal to raise funding for Title I programs by $1 billion. This $1 billion increase is intended to promote better education for students living in high poverty areas by growing school choice programs.
The objectives of those who promote school choice programs is simple: introduce competition to schooling and allow students to transfer from failing schools to charter schools or receive a voucher to attend private schools. This brand of education, however, only deepens the divide between high-income and low-income communities as it fails to promote higher educational standards in poorer neighborhoods. Providing education alternatives, as Secretary Devos put it, is different from supporting equitable opportunities to students of traditionally disadvantaged communities. Wealthy neighborhoods can support strong school districts with high property taxes and school choices serve as a possibly superior alternative. For low-income students, however, spots at neighboring public schools and charter schools are often highly selective and limited. As such, the high majority of these students do not benefit whatsoever from school choice programs. One need only look at the recent failure of school choice programs in Michigan. Although nearly $1 billion was used by the state of Michigan in taxpayer money, more than 38% of charter school students fell below the 25th percentile in academic assessment. In comparison, only 23% of public school students fell below the 25th percentile. Recent research by the Brookings Institute reveals similar trends in the states of Indiana and Louisiana, indicating that students who participated in school choice programs subsequently scored lower on standardized math and reading exams than students who remained in public schools. Not only do school choice programs offer economically disadvantaged students limited opportunities, they often fail their objective of raising educational learning in students.
Not only are school choice programs clouded in controversies of unequal opportunity, they are shrouded in legal and ethical controversy as well. School choice operate through federally-backed vouchers that parents manage to send their children to the school of their choice, public or private. Vouchers are rooted in legal controversy as they would be funding private, often sectarian, institutions. 76% of private schools across the United States are affiliated with Christianity, and federal funding for such institutions would be in violation of the First Amendment. Regardless of this violation, the Supreme Court ruled in favor of vouchers in 2002; the majority of state legislations, however, continue to restrict the use of vouchers in order to prevent state funding of religiously affiliated private schools. School choice programs thus are inherently associated with Christian education, putting non-Christian students at a disadvantage. Furthermore, private schools often lack accountability, managing public funds that in no way serve the public interest. Because private schools are privately managed, they can and do discriminate against student applicants based on religion, financial background, ethnic background, and English language ability. Furthermore, lack of government oversight has often resulted in instances in which private schools appropriated funds to pay hundreds-of-thousands of dollars in severance packages and profit to administrators. One recent example of such corrupt behavior was when a Pittsfield charter school awarded millions of dollars in pay and benefits to the founder’s family. In the state of Michigan, more than 61% of charter schools are for-profit management companies while another 17% rely on profits in some way, primarily for staffing. It is abundantly clear that public funds cannot be used to financially support private institutions that are free from government oversight as they often fail to appropriate taxpayer funds directly towards educating students and place non-Christian students at a disadvantage.
At the same time, Trump’s budget outline proposes eliminating all funding for certain programs such as the $2.25 billion Supportive Effective Instruction program which funds recruitment and training of educators in high-need school districts, $1.2 billion 21st Century Community Learning Centers program which funds before and after school services, and $732 million Federal Supplemental Educational Opportunity Grant program which provides financial aid for students pursuing higher education at the undergraduate level. Furthermore, nearly $200 million would be cut from the national TRIO and GETUP programs, interrupting the programs’ objectives to aid disabled and low-income students. As such, Trump’s plan will not only encourage a flawed and corrupt system of school choice but will also intends to disable the success and management of public schools, leaving only failing charter schools as options for American students.