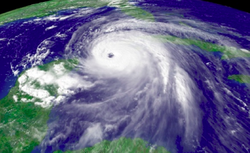 Katrina, Rita, Sandy, Matthew. These calamitous disasters are only a few examples of hurricanes that have devastated parts of the Eastern United States and islands that reside below the Florida Panhandle. They have caused countless deaths, displaced millions of people, and destroyed billions of dollars worth of infrastructure and property. All it takes to uproot cities and the lives of residents is the correct combination of warm ocean water, moist air, winds, and atmospheric pressure, which gives way to intense rain, winds, and flooding upon landfall.

As disastrous as they may be, hurricanes are a natural and necessary occurrence that redistribute tropical heat and regulate the Earth’s temperature. However, the instances of category four and five hurricanes in the North Atlantic have almost doubled in the past 45 years. This upsurge can be attributed to climate change in the form of global warming. An increase in global temperature results in warmer air, which is capable of holding more moisture, thus resulting in heavier, more intense precipitation when the air condenses. Furthermore, temperature rise causes ocean water to expand via thermal expansion, and also melts glaciers and ice caps, which introduces previously land locked water to the ocean. Both of these processes cause sea levels to rise.

The reason why sea level rise makes hurricanes more damaging is due to a phenomena called storm surge. The storm’s strong winds form a vertical circulation over the ocean. This circulation experiences disturbances from the ocean floor as it nears the coast, thus forming a sudden rise of water that is pushed inland. Over the past two decades the average annual rate of sea level rise has been .13 inches (3.2 millimeters), therefore resulting in even greater storm surges. To put these numbers in context, a one foot (305 millimeter) storm surge carries enough force to knock a car off the road.

It is important to note that while climate change causes more destructive hurricanes, there is still uncertainty over how a hurricane’s frequency and intensity are altered. However, something that can be predicted with relative confidence is that storm intensity will increase as rates of global warming rocket upwards. As a result, society will have to delineate methods to respond to the consequences of this devastation.

One of the greatest issues that arises in the face of a hurricane is the matter of how those who have lost property will move forward with their lives in the next few days, months, and even years. An immediate problem that displaced residents face is the question of where they can seek shelter during the storm. In response to Hurricane Matthew in October 2016 and Hurricane Sandy in October 2012, Airbnb opened up thousands of accommodations free of charge to those evacuating their homes. While this philanthropic gesture provided one solution to a short term problem, there have been difficulties mitigating the long-term complication of homeowners receiving monetary reimbursement for property loss and damage.

Some insurance companies have avoided compensating their clients by arguing the technicalities of what counts as “hurricane damage”. The average home insurance policy typically covers wind and storm damage, but excludes destruction caused by rising water. Therefore, insurance providers argue that they are not required to compensate for flood damage. However, since storm surges are inextricably linked to hurricanes, it would seem that hurricane damage includes flood damage, and that storm induced flood damage would therefore be protected by insurance. Many residents are not aware of this subtle differentiation, nor do they prioritize reading their insurance statement’s fine print in the midst of an impending, life threatening storm. Therefore, only after the storm has passed do they call their insurance company, and come to the nasty realization that water damage is not insured. Sarah Viola, the proprietor of an Italian restaurant ravaged by flooding from Hurricane Matthew, is just one example of a victim whose water damaged property is not insured by hurricane insurance. As a result, her restaurant was forced out her business. Although “it is definitely an overwhelming feeling at this point”, she plans to appeal the policy.

While insurance companies’ avoidance of explicitly laying out their terms of hurricane insurance coverage allows them to evade their obligations, this skewed interpretation harms the livelihoods of those that depend on this insurance to recover after experiencing the storm. A potential way of mitigating this problem is to utilize a government regulated command and control system that by law requires storm insurance to unequivocally account for any losses that occurs in the wake of a hurricane. However, this would likely result in an increased premium to all those investing in the insurance. Another option is to strengthen, and make more accessible the government’s National Flood Insurance Program, which aims to reduce the risk of flooding. Either way, with the growing intensity of hurricanes and the damage they wreak, a more reliable system to protect against property loss must soon be implemented.