Immigration: The Right Topic at the Wrong Time 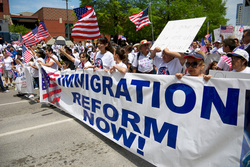 On Wednesday October 3rd the House Democratic leaders will present new a proposal that aims to replace the current immigration system in the United States. The legislation looks a lot like what was drawn up by the famed “Gang of Eight” and passed, in a rare bipartisan agreement, by the Senate in June. The only major difference is that a border-security measure, which called for the building of 700 miles of fences along border and a doubling of the border security force, has been replaced by a call to the Obama administration to devise a 5 year plan that will ensure 90 percent of those trying to cross the border are apprehended.

There is no doubt that immigration is an extremely important topic, and that the current U.S. system needs to be replaced soon. Around 11 million undocumented immigrants live in the United States, hiding in the shadows. They do not have the means to gain citizenship, and they live with the constant threat of deportation even though, in many cases, they are no less “American” than any actual citizen. The possible threat, however, they pose to lower class Americans’ ability to get a job and the severe feelings many feel about removing them means that a simple amnesty will not do and intense negations are necessary. It seems though that for the most part people are behind change, which can be seen in the Senate’s passing of the original bill. Despite these reasons for presenting immigration as soon as possible I do not agree with the Democrats strategy of proposing their new plan at this time in an attempt to pressure the GOP, who have thus far been dragging their feet, into action.

These days so much is made of the power that the “24/7” media holds over public opinion. People have constant access to countless materials, and in many ways are more informed about current events and politics than ever before. This wealth of materials would lead you to think that many different topics could hold the public's attention at one time, but I do not believe this to be necessarily true. It seems as if only one major issue dominates the media narrative at a time, with each new, exciting, and controversial topic pushing the previous to the back burner in a matter of moments. Think of just this past summer; in August the debate over NSA spying, Edward Snowden's search for asylum, and eventually the effect his staying in Russia had on their relation with the U.S dominated national headlines. This was soon brushed aside by the conflict in Syria, which all of a week ago seemed like the biggest international incident in years, but has now disappeared into the background as the government shutdown dominates the national conversation. This progression shows that most of the American population, to be frank, can only care about on thing at a time, except for the economy, people always worry about that.

With this idea in mind, the decision of the Democrats to announce their new proposal on Wednesday seems unwise. Immigration is a topic that will require significant public support if it is going to be pushed through the House. Already House Republicans are denouncing the bill, claiming it is completely unreasonable and saying that it has zero chance of being passed. It seems as if, despite claims to the contrary, they wish to possibly push the real debate on immigration till after the midterm elections, which is much too far away. One of the only ways the current House members can be persuaded to come to the table and negotiate is if the public demands it. The problem is the public is not listening right now. Everyone is way too focused on an agreement being reached to resume government activities. A quick look at the main CNN page is most telling, there is not a single mention of the upcoming immigration proposal. The people are simply preoccupied. The House Democrats were surely right to argue that immigration reform needs to happen soon, but the timing of their announcement means the exact opposite may end up being true.