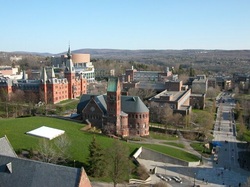 
In recent months, protests against Hydraulic Fracturing (“fracking”) have permeated New York State. While research on fracking operations provides a convincing case for a ban on the practice, opponents to fracking do little to offer viable alternatives. So who should we turn to to bring about tangible, lasting changes to meet future energy needs? In Ithaca, we would turn to Ithaca’s major anchor institutions: Cornell University and Ithaca College. But why not look to local governments or the plentiful non-profit organizations that already focus on issues of energy sustainability in Ithaca? These Anchor institutions have the means to achieve sustainable solutions; but its time that they shared the wealth.

Anchor institutions are powerful engines of growth for the communities in which they are based, but that does not suggest that Cornell should do all the leg work and simply bring the surrounding Ithaca community along for the ride. Institutions like Cornell and Ithaca College are also dependent on their communities and as such, should strive to be more intimately connected with their those communities so that they and the Ithaca community can function as a cumulative unit rather than isolated pockets of progress. Don’t get me wrong, Cornell and Ithaca College to serve as exceptional models of environmental sustainability on both a local and national level, but the sustainability that these institutions pride themselves in is not true “sustainability” if it ends when you step off campus.

Integration of these anchor institutions with the Ithaca community has great potential to facilitate larger-scale initiatives that have more permanent impacts, and greater economic development and educational capacity-building benefits. As a land grant institution, Cornell in particular has a responsibility to engage the Ithaca community if it wants to stay true to its commitment to education as a means of community development. Cornell is supported by public funds and tax exemptions, and is heavily endowed. Syracuse University is already on its way to implementing similar initiatives. In 1998, Syracuse University opened its Center of Excellence (SyracuseCoE) “to create innovations in environmental and energy technologies that improve human health and productivity, security, and sustainability in urban and built environments.” SyracuseCoE has an expressed goal of creating jobs and invigorating economic development in upstate New York and supports community collaborations through its Center for Sustainable Community Solutions (CSCS). CSCS has seen success by working closely with local government, community organizations, state agencies, and academic institutions to train leaders and collaborate on environmentally and economically sustainable development initiatives, one of which led to their designation as the nation’s first LEED certified neighborhood development project.

While many Colleges and Universities are not as integrated with their surrounding communities as they could be, as national leaders in environmental sustainability, Cornell and Ithaca College could have a particularly influential role in addressing Ithaca’s future energy needs. Take wind energy infrastructure as a case study of the role Cornell and Ithaca College could play in helping Ithaca meet its future energy needs. According to an extensive study by Stanford researcher Mark Z. Jacobson and UC-Davis researcher Mark A. Delucchi- on the technical and economic viability of renewable energy infrastructure in New York State, wind power has the greatest potential to provide reliable renewable energy for NYS’s electrical, transportation, heating/cooling, and industry energy needs. Jacobson’s meticulous analyses demonstrate the viability of offshore wind farms along with functional transport systems to bring this energy to residential, commercial, and institutional facilities throughout NYS. Wind energy is currently the least expensive of all the sources analyzed, especially at latitudes found in NYS, and the additional land footprint needed to implement Jacobson’s proposed solar power infrastructure (0.96% of NYS) is minimal when compared to the footprint of agriculture in NYS (23.8%). Technical findings such as Jacobsen’s show that wind energy could offer a viable renewable energy source, but the bottom line is that neither the city of Ithaca nor Cornell and Ithaca College could bring about a complete shift to wind energy without the other.

How can Cornell and the city of Ithaca collaborate effectively to meet Ithaca’s future energy needs? The city of Ithaca and Cornell could devise plans for institutional investment to ensure finances are directed where the community needs them most. If Cornell and Ithaca were to form a coalition that included local government, community organizations (such as New York State Energy Research and Development Authority (NYSERDA), NY Power Authority, and Tompkins County Climate Protection initiative), and state agencies, the entire community could tap into the educational training and skills of the university faculty and students, in addition training new leaders and technicians.

As an institution that prides itself in the impact of its scholarship on pressing world problems – Cornell needs to address these issues across town before we tackle them across the globe.