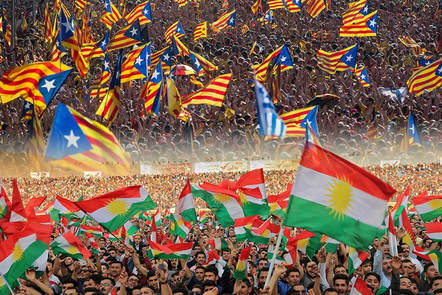 Recent movements for independence in Catalonia and Kurdistan, although unique in background and geopolitical context, are both subject to the wide-reaching influence of world politics. This article compares the history and events surrounding the Catalonian and Kurdish referendums and utilizes international relations theory to explain the international response to each movement.

​
​
Two major regions of existing countries, Catalonia in Spain and Kurdistan in Iraq, voted in favor of secession in recent months. While these votes do not carry any official weight, the votes have been portrayed as largely symbolic of a regional desire for independence. These two examples are not the only regions seeking independence from their current countries, as there have been an average of 52 active secession movements every year since the end of World War II. Both Kurdistan and Catalonia have had longstanding movements for autonomy. The success of their referendums have been controversial and subject to the circumstances of world politics, into which they have provided great insight. In comparing the two movements and the controversies surrounding them, one may learn about the economic and military interests of world powers.

​Catalonia has been pursuing independence from Spain since the Spanish conquered Barcelona, Catalonia’s capital, in 1714. Today, it is an economic powerhouse within Spain that accounts for 16% of the nation’s population and 20% of its economy, largely due to tourism and industrial development. In 2006, Spain’s government acknowledged Catalonia as a nation and granted it taxation power, but this total autonomy was short-lived, as it would be revoked by Spanish courts in 2010. Although Catalonia still maintains more autonomy relative to other Spanish provinces in its finances, it desires total autonomy and independence, a demand which Madrid refuses to grant, given the possible effect on the nation’s economy. When the referendum was held on October 1, the Spanish government sent national guard officers to confiscate ballots and prevent the referendum, but the vote still occurred, albeit with low turnout (approximately 42%). The Spanish government’s response effectively galvanized many pro-independence voters, as demonstrated by widespread protests and strikes by pro-independence Catalans the day after the vote. While participating Catalans voted overwhelmingly in favor of independence, opposition points to the low turnout and the unconstitutional nature of the referendum. A week after the referendum, those against independence rallied in the streets of Barcelona, calling for Spanish unity and exhibiting disdain with the push for secession. Similar protests have occurred, as leaders in Madrid have reacted quickly and disbanded the regional government, taking direct control until a new government is elected. After these actions, crowds of pro-unity Catalans filled the streets of Barcelona, calling for an end to the independence movement and urging punishment for former leader Carles Puigdemont. On an international scale, many nations as well as the EU have shown support for the Spanish government in their attempts to maintain control of Catalonia. While this constitutional crisis has sparked chaos within Spain, the international community has been hesitant to intervene directly.

In the case of Kurdistan, however, the international community has been quite vocal in questioning the timing and legitimacy of the referendum. The Kurds are an ethnic group in the area covering Northern Iraq, Syria, Iran, and Turkey. They are the fourth largest ethnic group in the region which also includes Arabs, Persians, and Turks. The Kurds of Northern Iraq hold relative autonomy, as they elect their own government and even have their own militia, the Peshmerga, which has been largely involved in fighting against ISIL (ISIS). In Iraq, the Kurds were subject to persecution under the dictatorship of Saddam Hussein and his government, furthering their distrust of Baghdad and strengthening their desire for self-rule. As a major force in fighting ISIS, Kurdish fighters won key battles and held territory in oil provinces. These regions, including the province of Kirkuk, have been a major source of income for the Kurdish government and fueled growing tension with Baghdad before the Iraqi military took much of the region. The ongoing conflicts in the region as well as the concerns of neighboring nations have led to vocal opposition by much of the international community, as Israel is the only nation to be openly in favor of the Kurdish referendum. The United States questioned the timing of the referendum in the context of the fight with ISIS, fearing any internal conflict within Iraq would jeopardize recent gains against the terrorist organization. Neighboring countries such as Turkey and Iran that also have Kurdish populations have voiced concerns with the precedent the referendum sets for their own Kurdish minorities, threatening military involvement. Beyond the threats, Iran acted to close its border with the region until recent developments caused the leader of the Kurdish government, Masoud Barzani, to announce his resignation. While similar in many ways, the Kurdish movement for independence faces many more obstacles than its Catalonian counterpart due to the nature of world politics.

Both Kurdistan and Catalonia perceive legitimate claims to independence, but opposition to their movements exhibit the ideals of two key paradigms in the field of international relations. The constitutional crisis incurred by the referendum highlights a crucial contradiction that, as put by the New York Times, “Borders are sacrosanct and people determine their own political status.” In building off the ideals of liberalism, many nations venerate the values of democracy and self-determination and look to implement it on the world stage through cooperation best exemplified by the ideals of the European Union. The EU, in its opposition to Catalonian independence, is acting to defend the ideals of liberalism, including a respect of constitutions as the basis of law and support for the sovereignty of fellow EU members. Therefore, in maintaining support for the ideals of national sovereignty and constitutionalism, the international community is simultaneously undermining notions of democracy and self-determination. Kurdistan, on the other hand, is subject to the complexities of realpolitik, where the paradigm of realism is at play and the currency is power. The United States, Turkey, and Iran are all attempting to maintain some sort of control within the region and view the formation of another, self-interested, possibly competing power as destabilizing. The distinct interests surrounding Catalonian and Kurdish independence explain why the international community has been less inclined to be directly involved in Spanish politics. Although the referendums were supposedly meant to show the will of the people in these respective regions, it is not the will of the Catalonians or Kurds that will determine whether they ultimately gain independence. The politics of security and cooperation will be subject to the will of those nations in power, namely the EU, US, and Middle Eastern powers surrounding Kurdistan. The complexities of contemporary independence movements serve as proof of Thucydides’ claim that, “The strong do what they will and the weak suffer what they must.”