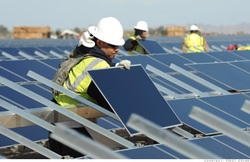 About 6 months ago I wrote an article entitled “Solar Power: Why You Should Invest Now.” In that article, I suggested that there were good reasons to invest in SunPower (NASDAQ:SPWR), First Solar (NASDAQ:FSLR), and SolarCity (NASDAQ:SCTY). I’ve said this before and I will say it again: I am not a financial analyst, day trader, or any sort of expert whatsoever on the stock market. I simply made some speculations regarding those companies using my engineering and solar industry background. My overall theme was that based on major interest in solar power, including investments from Warren Buffett, along with news of long term large-scale contracts for solar, the market should be favorable to these companies.

So how good were my predictions? Well, I guess that depends on when you bought and when you sold. When I wrote my previous article, SunPower was around $12 per share, and since then it peaked in July at $28.10 and is currently at $24.79. Of course, it could be a complete fluke. However, the fact that Buffett’s holdings company MidAmerican Energy invested billions into large-scale, long term solar farm projects for SunPower ensures the profitability of the company. So it might not be a complete surprise to see them doing well.

Next, lets take a look at First Solar. This company is especially interesting because it is one of the few solar companies that has been publicly traded for a few years, since 2007. On the other hand, SunPower and SolarCity both went public in the last two years. First Solar is also interesting because it had an enormous peak in 2008 of $211 per share, which is unheard of the in the solar industry. At least it was, until the “solar bubble” burst. However, the company stayed relatively afloat, with their stock price staying above $100 until 2011, when it tanked down to almost $10 per share. Most would say that this company is a bust, but I disagreed in my previous article. Back in March of 2013, the company was around $25 per share, and since then it has peaked at $56.40 and is now sitting at $39.80. This might not be historically impressive, but it is still surprising to see First Solar bounce back a little after their enormous drop.


Last, let’s see how SolarCity is doing. From its IPO in late 2012 to March 2013 when I wrote the previous article, it stayed in the $10-$20 range. Since then, it reached a peak of $51.60 in May, and it is now at $38.43. SolarCity is a unique solar company in that it does not actually manufacture its own panels; rather, it buys panels, installs them onto homes, and charges homeowners for the electricity from the panels. This way, the customer does not need to give a huge down payment for the solar panel system, since solar is such a high-capital energy source. So instead of charging for the panels, SolarCity bills their customers monthly for the electricity they consume, and this bill is often lower than their local gas provider’s rates. The company has discovered how to have a win-win in an underperforming industry. I expect to see their stock go up in the long run, as gas prices rise, and Americans look towards solar energy.


So overall, my suggestions were surprisingly good for someone with no finance or trading background. All of the companies’ stock prices have at least doubled in the last six months, which is uncommon for most industries. I haven’t decided who else I want to put my money on, but for now, I believe in SolarCity and SunPower.

Honorable mention goes out to Tesla (NASDAQ:TSLA), whose CEO Elon Musk has close ties to SolarCity. In 2013, their stock prices have more than quintupled from $30 to  $177 today, and they have risen quite steadily. I won’t go into a full analysis of the company; let’s save that for another day. Overall, I am excited to see sustainable technology becoming the basis for economically viable businesses.