Is Email Bad for the Environment? 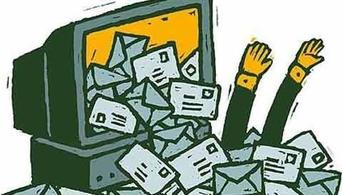 While sending one email has a smaller carbon footprint than sending one letter, frequent communications via digital mail results in a rapid accumulation of emissions released from sending emails. Since many email services allow users to send as many messages as they wish with no financial cost, society must examine methods to mitigate this unrestrained email use
The high-paced development of modern technology has ushered in a digitized age, in which unremarkable, simple activities of daily life can negatively impact the environment. For example, while the act of responding to and sending emails is often labelled as a mundane, tedious chore, it contributes significantly towards one’s carbon footprint because computers, servers, and routers must expend energy to send, read, and filter emails. Since different types of messages consume varying levels of energy, emails with a large attachment can have a footprint equivalent to 50grams of carbon dioxide. Meanwhile, a “regular” email’s carbon dioxide equivalent is around four grams, and a spam email has a carbon footprint of roughly 0.3 grams of carbon dioxide.

In order to put the grams of carbon released into perspective consider that the average passenger vehicle emits 411grams of carbon dioxide per mile. In the context of carbon emissions released, driving one mile is roughly equal to sending 8.22 emails with attachments, or 102.75 “regular emails”. The average business user in 2016 sent and received an average of 123.9 emails per day, and 45,224 emails a year. As a result, the average user’s annual email use in terms of carbon emissions was equivalent to driving 110 miles, or a road trip from Baltimore to Philadelphia.

If this is the case, can electronic mail still be heralded as an eco-friendly alternative to “snail mail?” Sending a 10 gram letter made from recycled paper emits around 140 grams of carbon emissions as a result of paper production, printing, transportation, and decomposition. While sending a single letter has a greater environmental impact than sending a single email, people communicate more frequently via email, and so emissions released from electronic mail accumulate more rapidly.

In order for email to be an environmentally friendly method of communication, usage should be reduced, so that only necessary emails are sent. For example, if the 62 trillion spam messages sent out annually are eliminated, 20million tons of carbon dioxide could be prevented from entering the atmosphere. The email usage problem is reflected in Garrett Hardin’s theory of The Tragedy of the Commons, in which individuals exploit shared resources to their own benefit, which results in the depletion of the resources for everyone. In this case, the shared resource is the environment. Email services such as “Gmail” allow anyone to freely send work-related, promotional, or personal emails. According to the theory, the user gains all the benefits of sending emails, but share the costs of environmental damage with all the other inhabitants of Earth. Therefore, he or she continues to freely exploit email services. As a result, spammers do not consider the environmental degradation associated with their actions as long they can continue to advertise their services.

A possible solution would be to impose a small tax on email, so that it might cost one tenth of a cent to send a digital message. The average email user would incur minimal costs, but mass spammers using listservs would quickly accumulate a hefty fee, and drastically reduce the number of messages they send. However, this approach would create inequity by cutting email users who cannot afford this tax, or those who do not want to provide a payment method before creating an account. In addition to measures implemented through policy, individuals can also protect the environment by refraining from sending spam and unsubscribing from listservs. Either way, individuals, organizations, and policymakers should cooperate to reduce society’s email related carbon footprint.