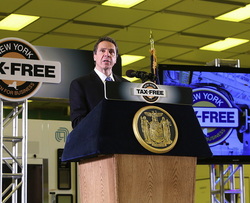 Imagine this: you live in a city with a business that has been around for as long as you can remember. This business is the largest employer in your city. Many of your friends and family are employed by this business in a variety of roles, from executive to janitor. This business will never leave your city, ever. It’s guaranteed. They will never outsource any low skilled labor to another continent. Your friends and family value their job security highly, and take pride in working at this company. This company values the city in which it exists, and invests in schools, startups, and city projects.

Does this sound like a fantasy world? It isn’t. I’m simply talking about a University. In fact, I’m talking about nearly one thousand places of higher education in the United States—one-eighth of those that exist. I’m talking about the relationship to the cities in which they exist.

The way I see it, when de-industrialization and globalization decimated the manufacturing industries in cities across the nation, they tended in one of two directions. They either collapsed over the years because no forces moved against the various causes of economic dissolution, or replaced their manufacturing with a knowledge-based economy focused on anchor institutions like hospitals, cultural centers, and places of higher education.

However, none of these universities could survive without its surrounding community. A university relies heavily on its surrounding community to provide an attractive and vibrant community, including bars, restaurants, and shopping locations, to increase interest in attending that college. Recruiting high-quality faculty is a function of this environment as well. Every investment an anchor institution makes is a toast to its own health.

These relationships between universities and cities are scalable. Look at what Governor Cuomo (D-NY) signed into law in June: Tax-Free NY. Under his legislation, new businesses are able to operate on or adjacent to SUNY and some private university campuses without paying taxes for up to ten years. That includes sales, property, and business taxes. Communities across Upstate NY have the potential to become magnets for new businesses, new startups, new venture capital, and new jobs, taking economic development and job creating efforts to a level never seen before.

If other states can develop innovative plans that incentivize businesses and universities to team up with their communities, it will have massive, mutually beneficial effects on stabilizing communities and providing jobs for a wide range of education and skill levels.