Magnet Schools: The Answer to Our Educational Problems? 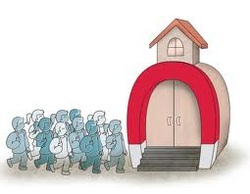 Magnet Schools, or free public elementary and secondary public schools of choice that are operated by school districts, usually have a focused theme and are aligned to a specific curriculum such as Science, Technology and Engineering (STEM), Fine and Performing Arts, International Studies or others. Though they often use state or district standards of teaching in all subject areas, magnet schools often give students a leg up in both the specific area they focus on and in general to students attending a normal district school.

Magnet schools have enumerable benefits to the students they help educate. By attracting a wide range of students based on their interest within the school theme, magnet schools usually have a diverse, in both the socioeconomic and cultural sense, group of students. These students also tend to have improved academic achievement, increased cultural competence of students, higher graduation rates, and increased parent satisfaction. These factors may also lead to benefits outside of the school itself: higher rates of employment and wealth, and lower rates of poverty and crime in the neighborhoods surrounding these schools. But does this mean that magnet schools are the answer to the educational woes in our country?

According to Victor Harbison, a civics and history teacher at a school where 97.4% of the students live in poverty, the answer is no. “It seems everyone wants to talk about the long-term impact of short-term thinking. Why not do the same with education and magnet schools?” he questions. Years ago, it was thought that “smart kids” were not being challenged enough while underprepared ethnic minorities were moving in and lowering test scores. Stemming originally from an attempt to fight de facto segregated distracts, magnet schools, as a short-term solution, were a very logical place to start

Years later, however, everything seems to be backwards. The best and brightest students from our normally underperforming communities are sent away, while the students that are left now find themselves in an environment where the peers who have the greatest influence in their school are the least positive role models. Without these potential leaders in the community that can influence others, most in underperforming communities are unlikely to improve their status. Mr. Harbison believes that we have taken an economic approach to an educational problem, but in education “we can’t lay off students who have a negative impact.” Adopting a business model for the educational system has, and always, will be a failure, he states.

The system as it is stratifies communities; many of the brightest kids already feel alienated from their neighborhoods by graduation time, further driving a wedge between the privileged and not-so-privileged in education. Condemning the vast majority of students in a community to sub-standard schools while the already skilled enjoy a higher quality education can, in no way, be a successful long-term education policy. And most importantly, the benefit to the few in no way outweighs the extreme detriment to the most. It is time to relook at the problem of underperforming schools in this country.