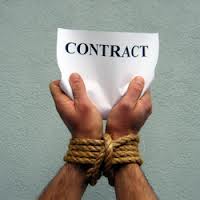 In July 2005, Jamie Leigh Jones, a former employee of military contractor KBR, was gang raped by co-workers while working in Baghdad. Jones was held captive in a shipping container without food or water by two KBR guards until the State Department was called in to rescue her. Jones attempted to file a lawsuit against KBR in 2007 but was denied a trial because her employment contract included a mandatory arbitration clause. After four years of battling the courts, Jamie Leigh Jones received her day in federal court with the help of several prominent senators. Unfortunately, many exploited individuals who came before and after Jones did not receive the same press coverage nor opportunity to have their claims fairly decided by the justice system.

A mandatory arbitration clause is a clause in a contract that requires parties to settle their disputes through an arbitration process. Decisions from these arbitrations are binding. The 1925 Federal Arbitration Act grants the power to include mandatory binding arbitrations in consumer and employment contracts. The law states binding arbitration is “valid, irrevocable, and enforceable save upon such grounds as exist at law or in equity for revocation of any contract.” It also allows federal courts to enforce arbitration if a party does not comply with the agreement. Essentially, it shuts the doors of the courthouse to consumers and employees by forcing them to sign away their rights to sue, usually unknowingly.

In an attempt to clear backlogged courts, judges have expanded the use of mandatory arbitrations leading to a series of unfair outcomes for average Americans. First, arbitrators can be unqualified to oversee complex cases, and they are not required to follow current case law. They do not have to be lawyers nor produce written decisions. Arbitrators serve the company that the dispute involves not the consumer; therefore they are incentivized to rule in favor of the company in order to remain on payroll (where they can make up to $10,000 a day.) The arbitrator’s decision is made behind closed doors and is not subject to appeal. Almost every arbitration clause prohibits participation in class action suits, which are the most reliable method for individuals to take on large and powerful corporations. Finally, arbitrations can’t provide remedies such as punitive damages to litigants in the case egregious behavior has occurred.

The University of Michigan Journal of Law Reform found that 93% of employment contracts used by 21 major corporations contained such clauses.  So once you’ve gone over the terms of your employment contract with a magnifying class, you should next look into which companies you’ve signed your rights away to. Verizon, Sprint, AT&T, Sony, Citibank, Ticketmaster, and Comcast all have clauses in their contracts negating all class-action claims. Ironically, so does Netflix, yet they offer “Hot Coffee” on instant streaming, a documentary that exposes the outrageous practice.

Last May Minnesota senator Al Franken proposed a bill that would outlaw mandatory-arbitration clauses. The Arbitration Fairness Act of 2013 would be a step in the right direction, ensuring American’s keep their civil right to a day in court. Currently, the bill sits with the Senate Judiciary Committee while it waits to be sent to the House or Senate as a whole. Until then, consumers and employees should think twice about simply skimming their bills, health insurance plans, and employee handbooks.