Mr. Sharif or: How I Learned to Stop Peace Talks and Love the Bomb 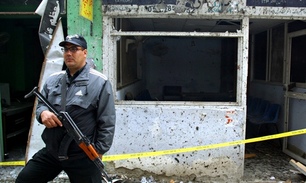 The Taliban has long been a impediment to the sustainable development of Pakistan, but as peace talks deteriorate, Pakistan may finally use military force against the insurgent group. Coming off the heels of an attack in the nation's capital, Islamabad, members of Prime Minister Nawaz Sharif's cabinet have begun to voice their increased support for a military operation.

Defense Minister Khawaja Asif  noted that the attack has completely eroded the possibility of continued negotiations with Taliban groups. However, the attack, which killed 11 people, was carried out by Ahrar-ul-Hind, a group that separated from the Pakistani Taliban recently. The splinter group's leaders are noted to have deep ties with other violent militant groups, which serves as a reason to fear the continued growth of militant action in the country.

The military is now to set to launch an offensive in North Waziristan, a hotbed for militant activity in northern Pakistan. Though, various problems arise with a single-location military action by the government. First, military attacks will only result in increased retaliation by insurgents.  Taliban members are no longer limiting their attacks to tribal regions the military can attack. Terrorist cells are becoming increasingly dominant in Pakistan's major cities as evident through recent attacks in Karachi and Islamabad.

The government must create a more definite and extensive security infrastructure within both urban and rural regions to better prevent continued bloodshed. Currently, Asif does not believe that the government can win a long-term battle against the Taliban with status quo structures; the proposed National Counter Terrorism Authority (NCTA) and recently updated National Security Policy have not been fully implemented. The new security policy outlines the government's new offensive approach to dealing with terrorists and utilizing the NCTA as an integral agent in combating insurgency. However, implementation of the bill has stagnated while militants continue to attack the nation's cities and villages.

Another aspect of the Taliban question that Pakistan must consider involves Afghanistan and their also large population of insurgents. The extensive U.S. occupation of Afghanistan is coming to a close, and that could possibly open up spaces for insurgent growth. Pakistan's shared border with Afghanistan is the site of heavy militant action and a growth on the Afghanistan side would directly affect Pakistan. This kind of growth would provide the Pakistani Taliban with major support according to Minister Asif and serves as a major consequence of non-action.

The Taliban have proven to be a Pakistani Hydra, when one group is defeated, two more emerge in its place. If the Pakistani government aims to be as successful as Hercules in the battle against this Hydra, then they must understand that the Pakistani Taliban cannot be quelled through strictly peace talks. The groups are resilient and violent and the government of Pakistan will never be able to completely satisfy the militant's thirst for power. A military offensive is likely necessary but not without strategic coordination and security for the entire country first. Both of Pakistan's major problems – its energy crisis and militant insurgency – are possible due to a lack of infrastructure. Without an adequate statewide security infrastructure, any military combat will only be partially productive.