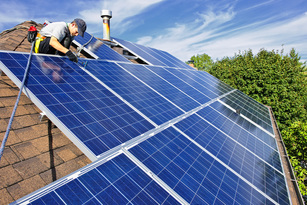 One of the main selling points of solar power is the monetary savings offered by the technology. Through both slashing electric bills, and with a process known as net metering, solar panels enable customers to save money in the long term. The importance of these monetary savings is that, while the knowledge of eliminating one’s contribution to greenhouse gas emissions is incentive enough for some people, many require a financial motive to move them to action. This is particularly true because in most cases, making the switch to solar means consumers must pay a significant upfront cost for the installation of photovoltaic solar panels on their property. Customers then expect to recoup that cost by no longer paying monthly electric bills, however it may be years before they break even and begin saving money. Therefore, it is beneficial to have another means of financially motivating individuals to go solar. To answer this dilemma, almost all states have approved net metering, a system by which individuals with solar panels on their roofs can make money back from an excess in energy generation.
With net metering, whenever rooftop solar panels produce more electricity than the house consumes, the local utility buys that excess electricity from the homeowner. This allows solar-adopters to save more money – even profit – by being green. Recently however, net metering experienced a major setback in Nevada as, on December 22, the state’s Public Utility Commission decided to eliminate the significant benefits of net metering.
In this decision, Nevada chose to “reduce by 75 percent the amount NV Energy pays customers” for net metering, resulting in not only a disincentive for people to choose solar, but cutting into the savings of those who already have solar panels (Rothberg). With this decision from the Nevada PUC, the state immediately began to suffer repercussions in the solar industry. For starters, SolarCity announced the following day that they would be exiting the state. Stating that, as a result of this policy, the company “has no alternative but to cease Nevada sales and installations,” SolarCity’s CEO demonstrated the negative impact of such legislative action (Penn). With the exit of the company, jobs will undoubtedly be lost, both by SolarCity employees, and by employees of other solar companies in similar positions, including SunRun and Vivint, who also pulled out and laid off workers (Nelder & Dyson). Another part of the decision made, was to apply the new reduced net-metering rates retroactively, such that customers who currently have solar panels and have been receiving money via net metering will also now be paid the lower rate. This means that customers who were enticed into buying solar panel systems in Nevada by the promise of net metering at a certain rate, will now be subject to what critics have labeled a ‘Bait and Switch’ (Leslie).
On the other side, the Public Utilities Commission explains its decision, with the argument that this policy was a subsidy, and not meant to last indefinitely. Additionally, the chairman of the PUC explained the retroactive part, reasoning that by ‘grandfathering’ in the older solar consumers, they prevent a situation where only new customers receive lower net metering profits. By retroactively reducing payment rates to solar panel owners, the PUC believes it is simply being fair. Furthermore, the American Energy Alliance contended that people who own solar panels tend to be wealthier, and so this ‘subsidy’ was such that that “poor and middle class are paying for the wealthy to have solar power” (Wheldon).
This policy has further significance in the larger context of solar power in the United States, as net metering is a policy that has been contested in a number of states. While it is already a major setback in Nevada, a very sunny state with thus great potential for solar expansion, similar legislation, if passed in other states, would be a much greater blow to the growing industry. If customers are motivated to purchase solar panels with the expectation that they will receive a certain rate for their excess electricity, then they will not choose to buy the panels if they believe this rate will be drastically lowered. This policy threatens to remove a key motivation to go solar, and thus hurts the movement away from fossil fuels.