Preserving a Piece of the Past: The Sumatran Rhinoceros 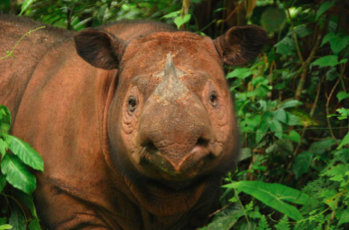 ​On March 12, 2016, Indonesian researchers came across an extraordinary discovery. For the first time in forty years, a Sumatran Rhinoceros, one of the rarest large mammals on the planet, was found alive in Kalimantan (Indonesian Borneo). The female rhinoceros, believed to be among just over a dozen specimens of her species left on the island, was quickly transported from the pit trap into which she had collapsed and airlifted to a protected forest ninety miles away. The intention of World Widlife Fund Indonesia in orchestrating this move was to establish a second sanctuary for the species. Their hope had been to facilitate a new breeding program in a last-ditch effort to preserve the mighty Asian ungulate, but on April 6, less than a month after her fortuitous rescue, the rhino, nicknamed “Najaq”, succumbed to her injuries. According to her caretakers, a leg infection “caused by snares from an earlier poaching event” had proven too chronic to cure.
The Sumatran Rhinoceros is the smallest, and genetically most unique species of rhinoceros still extant today. Small and hairy, it is the closest living relative of the long-extinct Woolly Rhinoceros which once roamed Siberia. Once abundant, with a range stretching as far as the Ganges River Valley, now it exists in only small isolated pockets of tropical rainforest in Borneo and Java, with the last individual from the peninsular Malaysian population having succumbed last year. All in all, the total number of individuals for the species likely numbers less than one hundred, with an even smaller amount of those being reproductive specimens. A combination of habitat loss and poaching created a rapid decline for the species which especially accelerated in the 1980s.
Some question whether any effort to save the rhinoceros would be efficacious or worthwhile. Unlike the African rhinoceroses or the Greater One-Horned Rhinoceros of India and Nepal, the Sumatran Rhinoceros provides no direct economic benefit to the people whom it coexists with. Too rare and too shy to be often encountered in the wild, it does not contribute to the economic proceeds derived from ecotourism in Southeast Asia. Instead, efforts to save it are of a purely moral nature, with value being ascribed to the species’ uniqueness and inherent existence. In addition, some argue that working to conserve the rhinoceros helps preserve some of its ecological neighbors, including Asian Elephants and Sumatran Tigers.
Over a period of twelve years (1984-1996), over forty Sumatran rhinoceros were stripped from their native habitat for a disastrous captive breeding program, in which no rhinos were bred until 2001 and from which all but one of the original specimens have passed on. Two male rhinos conceived at the Cincinnati Zoo are all that remains of this endeavor, and both have been transferred to the Sumatran Rhinoceros Sanctuary, located on the island of Sumatra itself. However, only one rhino has ever been successfully bred in captivity in Indonesia- a male born in 2012. Thus, government policy has to look beyond direct captive breeding programs for any chance of success in the conservation of the rhino.
One strategy is to designate “Intensive Management Zones” for breeding spots still utilized by the rhinos and also to connect more isolated populations in the process. Currently, population densities are too low to maintain viability so individuals must be artificially placed within range of one another to subvert this issue. However, although this strategy has been endorsed by regional countries, it has not yet gone into effect. Some scientists have also advocated for allowing the translocation of individual rhinos, which is currently outlawed in Indonesia. Thus, the current three separate populations would be treated as a “meta-population”. This effort could also be assisted by reproductive technologies, including but not limited to sperm transport, egg-freezing, and artificial insemination.
At least on a theoretical level, this could prove to be successful. The Southern White Rhinoceros, one decimated to less than fifty individuals by the beginning of the 1900s, has successfully rebounded in the last century to almost twenty thousand specimens across Africa. If swift and decisive action can be taken with regard to the Sumatran Rhinoceros too, it can avoid an unfortunate relegation to the history books too.