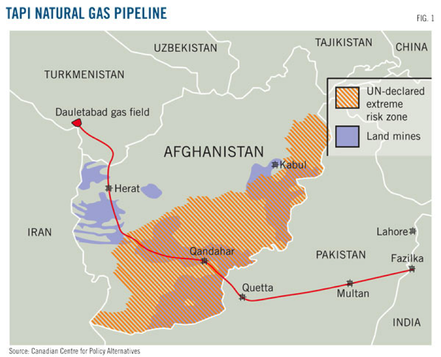 ​
In the face of violence in the region, the TAPI natural gas pipeline traveling from Turkmenistan to India could be a significant step forward for the economic, military, and political stability of South Asia, paving the way for a positive future.


​
In December of 2015, construction of the Turkmenistan-Afghanistan-Pakistan-India (TAPI) natural gas pipeline officially began. The pipeline will transport natural gas from Turkmenistan to the other three countries. However, due to security concerns over security, some groups are apprehensive about its construction. They are worried that the volatile nature of the region would pose a threat to the project. As the pipeline runs directly through militant-controlled areas, if an attack were to occur it could cause significant investments to go to waste, and create major problems for recipients of the natural gas. Here is why, despite thatthese concerns, the TAPI pipeline may revolutionize South Asia:

The Galkynysh gas field in Turkmenistan will be the source of the TAPI pipeline. Currently, the majority of natural gas from that field is exported to China, for which Turkmenistan is the largest supplier of natural gas. However, Turkmenistan has long been in need of more places to export its supply as China is not nearly enough. The TAPI pipeline would significantly expand the country’s market and provide strong economic growth for the developing nation, doubling its revenues.


In a nation where political support has often been a matter of violence, it is rare to see parties with opposing beliefs unified in supporting one cause. Thus the introduction of TAPI is highly beneficial to the country’s political climate. Unification over one issue is a positive step toward progress, making it easier for Afghan politicians to work on serious issues such as terrorism and violence.


Afghanistan has made it a goalaims to use its strategic geographic location to reestablish its dominance as a transit corridor. With TAPI, the goal will have been accomplished: Afghanistan is set to make $400 million annually in transit fees alone. In addition, the pipeline is expected to contribute about 25,000 jobs, slowing the flow of Afghan youth moving to Europe for work. Overall, TAPI will contribute significantly to Afghanistan’s GDP - which is always beneficial for a war-torn country.


On top of building unity within Afghanistan, TAPI would also strengthen the ties of the entire region. Turkmenistan, Pakistan, and India all have vested interests in the pipeline’s success, and would therefore support one another if those interests were to be threatened. A menace could range from violence to financial problems, but regardless, the increased regional unity is smiled upon considering the tense relations between India and Pakistan.


As the United States ceases its operations in Afghanistan, monetary aid is decreasing as well. The lack of funding has led to widespread power shortages in parts of the country. With the introduction of a new source of natural gas to Afghanistan in addition to the revenue the pipeline would generate, this problem would be solved.


Afghanistan’s Helmand Pprovince is known as the opium capital of the world. The drug accounts for the vast majority of the region’s revenue, despite remaining illegal. However, the TAPI pipeline would run directly through the province, replacing opium as an income generator. Over time, this would decrease the drug’s significance in the country.


Pakistan has a nationaln electricity deficit of 8500 Megawatts nationally. With the importation of this new supply of gas supply, more electricity would be able to can be generated. Even more significant is the country’s shortage of compressed natural gas, which this would directly resolve. Overall, TAPI would strongly boost Pakistan’s struggling resources.


Due to Pakistan’s current recent power shortages, the country’s largest textile exporters have been severely limited in production and exportation, causing great harm to the economy. With the power problem solved, the economy would be strengthened. Additionally, Pakistan would receive about $200-$250 million in transit fees from India annually, further boosting its finances.


Pakistan is not the only country that is low on energy in South Asia. At times, India only has about 95% of the power that it needs across the country. As India is emerging as one of Asia’s economic giants and the world’s largest populations, demand for energy is only going to keep growing. Furthermore, TAPI will not only bring India a new source of energy, but also create incentives to forge stronger ties with its historical enemy, Pakistan.

Overall, it is clear that the TAPI natural gas pipeline will revolutionize South Asia. It is unprecedented, badly needed, and will serve as a strong unifying, pacifying, and developing remedy for the entire region.
http://www.ogj.com/articles/print/volume-111/issue-3/transportation/roadblocks-remain- to-tapi-pipeline.html