Opposition to Abortion in a World of Compromise 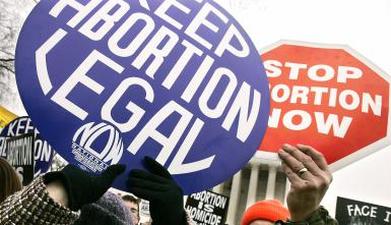 The current political climate is one of great divisiveness and polarization. Social issues have become partisan issues, and once something is split on party lines, the chances of compromise shrink dramatically. One such issue is a woman’s right to an abortion. Each side lies on opposite ends of the spectrum, ends which are an immeasurable distance apart ideologically. Again the possibility of compromise seems nonexistent, but upon closer scrutiny of each position, the responsibility to reassess weighs more heavily on the pro-life end of the spectrum.
The pro-life movement functions on religious principles, specifically the belief in the dignity and sanctity of human life. The Catholic Church  teaches that human life must be protected from the moment of conception, and that this protection should be “embodied and reflected” in a nation’s law. Many American pro-life organizations, such as the National Right to Life and the March for Life, see legal abortion as a violation of basic human rights. The GOP has made similar sentiments a cornerstone of its platform, seeking to extend the 14th Amendment’s protections to the unborn. The crux of the movement’s message is to defund, repeal, and restrict. It aims to defund pro-abortion organizations (specifically Planned Parenthood,) repeal pro-abortion legislation, and implement restrictions on legal abortion. Although the GOP does not officially push for the illegality of abortion, it promotes the effective illegality of the practice, as their positions make it difficult for a woman to consider abortion as a viable healthcare choice.
However, such an approach has not only produced far more violations of human rights than legal abortion has but also undermined the group’s commitment to the sanctity of human life. Two cases emphasize this: Whole Women’s Health v Hellerstedt and that of Kermit Gosnell.
In Whole Women’s Health v Hellerstedt, the Supreme Court decided that the Texas Department of State Health Services put in place regulations which produced “an undue burden on abortion access.” The problematic aspects of Texas law stemmed from a demand that Texan abortion clinics meet the standards of the Ambulatory Surgery Center Association. To convert an existing clinic into an ASC is an expensive process, and so, many clinics were closed.
Kermit Gosnell was a Philadelphian physician who, from 1979 until the shut-down of his practice in 2013, ran an abortion clinic while uncertified as either a gynecologist or an obstetrician. Gosnell’s clinic broke PA law and was continuously uncompliant with the state’s regulations. Gosnell’s practice remained open however, and any health concerns were swept under the rug. In the end, Gosnell was found guilty of 3 accounts of murder and given a life sentence. Such happenings are detestable on their own, but within the broader context of the abortion debate they are especially abhorrent.
While these cases have been used by the pro-life movement to highlight the need for stronger restrictions, it is equally cogent to argue that they highlight a lack of proper support for abortive services. Instead of a focus on defunding, repealing, and restricting, the pro-life movement should focus on supporting abortion services and cementing them as an essential component of women’s healthcare, expanding existing abortion alternatives, and promoting its message through education.
Thus the aim of the pro-life movement ought to be not to illegalize abortion, but to make the practice irrelevant, a secondary option among many other and more desirable alternatives. Activists should promote policies which increase funding to the Children’s Bureau and other adoption organizations, in order to augment the foster care system and improve the adoption process in general. Contraception is another area where improvement opportunities exist. Although the pro-life movement has typically opposed the use of contraception, seeing all forms of them as abortifacients, such a position is untenable, as the late, and pro-life, journalist Christopher Hitchens said: “If the church [and the pro-life movement in general] says that contraception and abortion are the same, it degrades the opposition to abortion.” Contraception could divert the most attention from abortion, and it is imperative to not only make it a readily available option, but also to incorporate it into healthcare plans as something guaranteed.
In summation, the politically conservative and religiously motivated pro-life movement, in acceptance of abortion’s legality, should rework its platform to focus on making the practice a present but unnecessary component of women’s healthcare through the support of abortion alternatives, namely adoption and contraception.