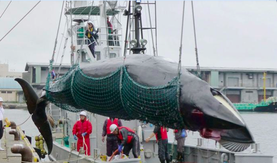 Despite the organizations’ efforts and a ban dedicated to the prohibition of whaling, many countries have utilized loopholes to carry on whaling. In this manner, Norway continues to hunt whales by claiming that it is allowed to break the ban since it left the International Whaling Commission in 1992. Similarly, Japan bypassed this ban by asserting the use of whales for research purposes. While the International Court ruled that Japanese whaling activities in Antarctica were illegal and ordered the cessation of whaling in the region, Japan proceeded to presume its whaling activities in both the North Pacific and the Antarctic.

These two countries’ combined efforts lead to the hunting and killing of approximately 2,000 whales a year. In particular, many stocks of fin, minke, humpback, and sperm whales continue to decline. There is no humane way to kill a whale at sea. Grenade harpoons are often used to kill whales in a manner that subject them to a long and painful death. Whales are unable to reproduce in a way that makes hunting them unsustainable.

Whale populations are unable to handle this sort of large scale hunting as they are also plagued with other rigors involved with living in the ocean. The world’s whaling population is only a fraction of what it once was due to both direct hunting and environmental factors. Climate change continues to make the Earth warmer and affect weather patterns, a phenomenon that causes a decrease in the temperature of saline concentrations in seawater. This affects the currents that influence the migratory and daily living patterns of whales. In addition, climate change reduces food sources available for whales and induces additional concerns for their continued vitality.

All these factors have to led to decreased whale populations and increased threat of extinction. For instance, the indigenous population of humpback whales in the North Atlantic may have been 10 times greater than their numbers today. Similarly, the population of minke whales was roughly twice what it once a thousand years ago. 90 percent of the oceans stocks of tuna, cod, and other large predatory fish have been depleted by commercial fishing. If we want to circumvent this fate for the world’s existing whale populations, a sizeable effort must be made today.

Since the International Whaling Commission is unable to compel countries like Norway and Japan to adhere to the ban, the US government must stake a claim in countering whaling practices as it is the only country capable of doing so. While there are many other powerful countries, the US is best suited to the task as its relationship to both Japan and the rest of the world attests to the degree of diplomatic power that the US holds over other countries due to its predominance in both world politics and economy. Additionally, there is precedence in US coercion through economic pressure such as the withdrawal of free trade agreements and other beneficial trading agreements with other countries. The US has been able to compel other countries to abide by its rules in Asia, an occurrence that is evident when the US put pressure on Southeastern Asia and Japan to pursue economic liberalization. Therefore, the preexistence of American coercion in Japan demonstrates the ability of the US to assuage these countries to become more inclined to accept its views.

Despite the formation of the International Whaling Commission and its ban on whaling activities, Japan and Norway continue to invest in their hunting activities. Whaling practices as well as environmental conditions have created a situation in which the protection of whale populations is necessary for their survival. Therefore, the US government must use its economic pressure in order to preserve these creatures.