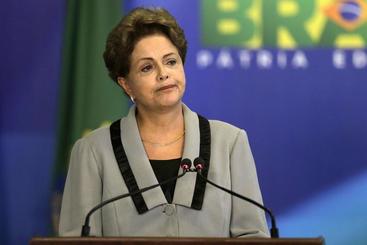 Brazilian President Dilma Rousseff is engaged in a fight for political survival as revelations of a massive corruption scandal inspire renewed calls for her impeachment. As the country’s ailing economy slides into severe recession, an ongoing anti-corruption investigation continues to ensnare the political establishment’s top brass. The understandably impassioned civilian and institutional response, however, may be a sign of democratic progress.
​
​
A massive corruption scandal involving Petrobras—Brazil’s state-supported energy colossus—is engulfing the country’s elites and paralyzing its political system. Millions have taken to the streets to call for the resignation of Brazil’s embattled president, Dilma Rousseff. The Petrobras scandal—one of the largest corruption schemes ever uncovered in modern democracy—is symptomatic of the deep-seated socioeconomic quagmires plaguing the world’s eighth largest economy. Moreover, the once unthinkable prospect of President’s Rousseff’s impeachment is becoming increasingly probable, and carries significant political risks. Yet, despite political chaos, the impassioned civilian and institutional response to the scandal should inspire cautious hope.

The Petrobras scandal is, at its core, an elaborate kickback scheme. Between 2004 and 2014, top Petrobras officials colluded with a cartel of companies to coordinate contract bids and overcharge the oil corporation for construction/service work. The Petrobras confederates received generous cuts of the companies’ inflated profits, much of which was funneled to the pockets of political elites. Prosecutors estimate that the total losses to Petrobras could amount to a staggering $5.3 billion. So far, 86 people have been convicted of crimes relating to the scandal, many of them from the political establishment’s top brass. In a country where—until six years ago—no sitting politician had been successfully prosecuted on corruption charges, these arrests are nothing short of unprecedented. While evidence does not suggest the President Rousseff’s direct involvement, the scheme has nonetheless tarnished her reputation, and rightfully so. The Petrobras scandal unfolded under Rousseff’s watch, when she chaired Petrobras’s board from 2003 to 2010. As chairwoman, Rousseff was seemingly either passively complicit or—perhaps worse still—completely oblivious to the rampant chicanery around her. Both scenarios offer a stinging indictment of the president’s judgement and competence.

In a country where corruption is both endemic and institutionalized, the Petrobras scandal is astonishing only in its scale. For decades, a systemic failure to prosecute corruption has bred a festering climate of impunity. A 2009 survey conducted the World Bank Group reported that nearly 70 percent of Brazilian business owners find corruption to be a major constraint. Roughly three to five percent of GDP is lost to corruption. In contrast, President Rousseff’s Workers’ Party (PT) has long endeavored to present itself as an advocate of the common people against a corrupt system. The implications of numerous senior PT figures—including Luiz Inácio Lula da Silva, the party’s charismatic founder and Rousseff’s (formerly) beloved predecessor—in the Petrobras scandal is tantamount to betrayal.

On March 18th, the lower house of Brazil’s congress voted to begin the impeachment process against the president—renewing calls voiced as early as 2015. Rousseff faces largely separate charges of using illegal accounting maneuvers to obscure the true size of the budget. In practice, however, the impeachment proceedings are driven, forcefully, by the Petrobras scandal as well as the country’s ailing economy, which is suffering from the worst recession since the 1930s. Indeed, dramatic GDP contraction (4.5 percent), rampant inflation (10 percent), and rising unemployment (7.9 percent) are amplifying civilian anger against the corruption scandal. Moreover, on March 16th, President Rousseff drew greater ire with her controversial decision to appoint Luiz Inácio Lula da Silva—her political mentor—as her chief of staff. The former president, too, has been ensnared by Petrobras corruption charges; his appointment to a ministerial position (which confers special privileges and protections) widely interpreted as an attempt to protect him from prosecution.

President Rousseff’s ruling coalition is in danger of disintegrating altogether. Already, the centrist Brazilian Republican Party has abandoned the president, and the Progressive Party may follow suit. Several prominent leaders of the Party of the Brazilian Democratic Movement—Rousseff’s most important coalition partner—have demanded her resignation. A damning 62.8 percent of Brazilians support her impeachment, and her approval ratings have plummeted to an abysmal 8 percent. Rousseff’s political star, it seems, is falling. Yet, Rousseff’s impeachment—if it indeed comes to pass—may set a potentially dangerous precedent. Specifically, the impeachment committee chair’s call to listen to “the street” is a red flag. The impeachment of a president on the basis of unpopularity undermines democratic procedures and institutions. Representative democracies are steered through elections—not by protests or opinion polls. Hence, impeachment should not proceed in the absence of evidence of criminality. Accordingly, the impeachment committee would be wise to deliberate whether Rousseff (1) financed her campaign using illegal Petrobras funds or (2) obstructed the Petrobras investigation.

Brazil’s corruption epidemic will continue, with or without Rousseff. Both her vice president and the speaker of the lower house (who is second in line for succession) are embroiled in corruption cases of their own. Of the Congress’s 594 members, over half--352—face criminal accusations and will remain in office until 2019. At the same time, however, many observers remain optimistic. The government’s anti-corruption investigations represent the efforts of assertive and independent institutions; the sincerity and scale of these efforts, moreover, speak to a respect for democratic accountability and the rule of law. In effect, the Petrobras scandal may signal changing times—an end to an era of political impunity. While the country remains mired in chaos, Brazil may eventually emerge from the political wilderness stronger and more democratic than ever before.