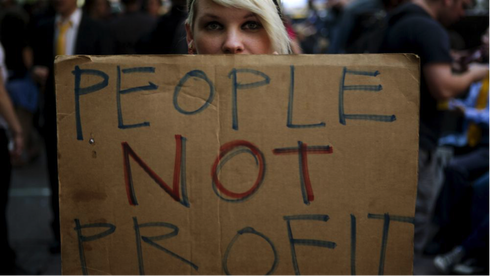 Citizens around the world are feeling the effects of a growing international economy as well as the expansion of their own domestic markets. Capitalism and globalization are stifling aspiring individuals in the middle classes, as the elite capitalize on their monopoly on financial growth. The growing gap between the upper and lower classes is continuing to push them in polarizing directions, as the poorer parts of society delve deeper under the poverty line. Compounded with changing values and polarizing politics, the lower classes require solutions on welfare systems in order to save their financial decline.

​
This year’s elections have seen American politics flipped upside down, culminating in the polarizing opinions of both parties. The rise of controversial outliers, such as Donald Trump and Ted Cruz, have reinforced value-based conflicts rather than class-based issues, and bringing out the darkest sides of the Republican party, including xenophobia and racial insensitivity. Debates have specifically turned to focus on non-economic issues, completely missing the growing issue between classes; income inequality. Since 1992, the real income of CEO for Top 500 incomes nearly tripled, while the real incomes of workers across all educational levels has remained flat, emphasizing the growth of the rich and the decline of the poor. Masked by the growth of capitalism and the powerful grip of elite businessmen on the international economy, the issue of income equality across the globe has been pushed aside, with the media focusing heavily on the conditions of markets, rather than the individuals of which they comprise of. In addition, the lack of emphasis on class-based conflict has left socio-economic issues off the forefront of popular debate. Politicians in the modern era are constantly looking to push political polarization and emphasize their unique values, failing to appeal to the issues which affect the majority of the populace. In the United States, and around the world, the growing epidemic of income inequality and wealth disparity can only be solved through these methods.

1.Emphasis on Democratic Equality: A Socio-Economic approach
During WWI and WWI, countries ensconced in endless conflict felt the strains of war of their economy. In addition to the Great Depression, whose financial consequences rippled across the United States and Western Europe, the conflicts made states realize that they needed every individual to step up and contribute to the war effort in order to win against the Axis powers. States were shaped by the commonality in their social atmosphere, and focused on an individual responsibility to contribute to the economy, either through bonds or small-time donations. More importantly, there were major shifts in the balance of power between elites and masses, as incomes rose to support job growth, thus lowering the gap between classes. Even after WWII, many countries encouraged further urbanization, bringing classes into close quarters and easing modes of communication to elite classes. However, as the wars became more distant and the majority of developed countries had successfully created a modern welfare state, the need for the redistribution of wealth and class struggles became less of a priority, giving away to post materialist values, such as national security and gender equality. Meanwhile, globalization undermined redistribution policies and allowed for a winner-take-all system that listened to the views of those at the top of the economic pyramid. The idea of climbing the ladder in a state’s economy became obsolete as compared to earlier, when exogenous factors had previously prompted higher income levels and the concept of socio-economic equality.

However, this process could be ultimately reversed through a renewed focus in class-based issues and greater concentration on state economic issues. Critics have narrowed it down to two approaches that have their respective pros and cons. The populist approach believes that middle and lower classes need to be protected, but in an extreme fashion which emphasizes hatred and insensitivity to external threats, such as foreign MNC’s and immigrant labor. Rather than emphasize integration, they emphasize excluding foreign labor from the picture, which draws major criticism from minority groups. Populism often runs into major issues in highly homogeneous countries in Europe, who aren’t as exposed to immigration issues as the United States and countries with compromised border systems. On the other hand, the second approach, socio-liberalism, enforces the redistribution of cash, goods and services to create an equal playing field through materialistic means. However, a dissocialized society could easily turn into a society based on merit rather than wealth, and unleash major civil unrest. Therefore, a compromise between the two contested theories centers on the individual, and their contribution to the socio-economic system. Developed states often suffer from the double standard, where citizens feel cheated when their efforts aren’t matched by their neighbor, and thus don’t trust the system. However, if a state were to renew a sense of communal equality and recognition of reciprocity based on singularity rather than individuality, the state could increase benefits for all citizens and lift up the lower classes when everyone is contributing towards the common good.
​
2.Direct Government Intervention: Big government taking a strong stance on capitalism
Another approach revolves around the involvement of a state’s government rather than adjusting the socio-economic stances of the populace. An increased foundation for a federal government and tightened economic policies are the start of a variety of options that a state could choose to follow. In the modern era, demand has grown faster than supply, and unskilled workers often face unemployment at a much more drastic rate. Although the rise of the “high-tech” sector has provided education for the progression of skilled labor, automated technology still is trumping the use of human labor. Therefore, the reduced demand for labor should be countered directly by increasing influence of labor unions and federal governments, to appeal to the consumer, especially when they prefer a human interaction, and take an active stance in technological innovation. However, this only solves half the problem, as citizens often find problems in existing fiscal policies rather than needing new ones, calling for major revisions. Therefore, governments typically need to reform the transfer of wealth in taxes and social transfers. A minimum inheritance, for example, would help transfer taxes to supply eighteen year olds with a starting bonus to help pay for school and housing, while a broadened estate tax for a lifetime would spread out the tax indefinitely. More importantly, a participation income has been a common tool in welfare reform and a typical replacement for the personal income tax exemption. In Brazil, under the leadership of Luiz Inacio Lula de Silva, the state introduced a series of welfare reforms based around the rules-based market economy that dominates their domestic and international growth. The crown jewel of the reform was a participation income, called Bolsa Familia, which grants families with cash handouts, especially mothers with children. To counter conservative criticisms, a series of “contrapartidas”, or restrictions, were put into place to make sure no families would abuse the program, thus ensuring administrative security. If governments across the international community would adopt participation incomes for lower class families, they would be increasing savings, while eventually increasing consumer confidence in purchasing goods and services. Society would increase trust in their government, and poverty would theoretically be eradicated, thus ending the gaps between classes. Despite these changes to policy being theoretical, the possibilities for increased government intervention in the capitalist domain remain at large for many developed countries, and could reverse the unequal trends.