Power of the Underdog: Pushing Back Against Chinese Oil Giants and their Environmental Degradation 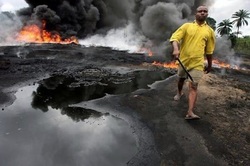 The hierarchy of power in a playground is really quite simple. The bigger and older kids control the swings, slide and monkey bars, while the more frail and younger children gingerly play around their more powerful counterparts. Larger and experienced “play-grounders” generously give permission to smaller tots to play, as well as commandeer any game or fun for themselves. It is a big kid’s world, and the smaller children are just playing in its sphere.

Niger, ranking among the poorest nations of the world, often appears to the international community as the fragile child of the playground.  With the country’s recent resistance to contractual obligations with the powerful China National Petroleum Corporation, however, power dynamics have begun to shift.

Although a historically weak and economically deprived nation, Niger boasts a large quantity of oil reserves. Until 2008, however, this precious natural resource was largely ignored and untapped by major oil corporations. That year, the then autocratic ruler, Mamadou Tandja, facilitated a clandestine and unpublicized agreement with China National Petroleum Corporation. This agreement provides domineering rights for the Chinese company to access Nigerien oil stocks along the border of Chad, as well as access and infrastructure for Niger to operate an oil refinery for national use.

Advocates for this agreement, including representatives from the China National Petroleum Corporation and Nigerien government officials, cited and continue to assert several benefits conjured from the oil acquisition. In a country that depends upon foreign aid for around half of its national budget, the prospect of economic development coincided with the agreement. The $5 billion dollar payment to the government was thought to encourage the growth of welfare projects such as digging wells, building schools and roads, hiring local residents to work at the oil refineries, and improving the overall national economy. Furthermore, the oil refinery allocated for the Nigerien government was predicted to, once functional, power the country with its oil.

Despite these proposed advantages, this 2008 agreement has invoked detrimental consequences to Niger. Much controversy surrounds the initial agreement between the Chinese company and Tandja. Tandja, who received a $300 million signing bonus for the international agreement, approved a contract that current Nigerien oil ministers equate to an unequivocal surrender of the land. In addition, the oil refinery to be utilized for national energy possesses an energy capacity that is three times that of Niger’s average energy consumption. The easily accessible oil from Nigeria also reinforces the superfluity of the national oil; Nigeria’s oil, subsidized from the government, is cheaper and more widely used than Niger’s resources. In fact, it is not uncommon for over abundant Nigerien barrels of oil to remain unutilized. From this perspective, the national agreement seems more aligned with the profit interests of certain political figures, rather than with the consistently struggling nation.

In continuation, although the promotion of public welfare projects has occurred throughout the nation, overall financial stability of the average citizen remains unsatisfactory; current living standards in Niger persist in much the same manner as prior to the agreement. Local citizens claim the oil refinery has brought few jobs, and of the jobs available, low pay and harsh working conditions enshroud the prospect. Moreover, a private auditor hired by the Nigerien government unearthed inflated costs and unfair charges made by the Chinese company.

Economic tribulations aside, the recent discovery of Chinese negligence to the Nigerien environment prompted recent national administrative resistance to the contractual terms of agreement with China National Petroleum Corporation. This opposition echoes recent defiance in Chad to the China National Petroleum Corporation. The Chadian government recently discovered that the Chinese company was dumping excess crude oil into local ditches, and subsequently making local workers remove it without the use of protection.

Environmental concerns among several African countries attempt to avoid ecological devastation similar to Nigeria. Nigeria, a country abundant in oil and commonly exploited by foreign corporations, is considered by some to be in a state of ecocide as a result of oil extraction. The United Nations Development Program estimates that from 1976 to 2001, over three million barrels have spilled in the Niger Delta, and only 70% of that was ever recovered. Consequences of this environmental negligence include the eradication of 5-10% of the nation’s mangrove forests, ground water contamination, and the death of many fish species.

Foumakoye Gado, an oil minister for Niger, was recently quoted in the New York Times explaining the country’s need to fight for the full value of the oil. Although Niger does not have comparable political or economic power to China, the country, and other similar African nations, is attempting to equalize this working relationship. What’s even more fascinating about this fact is that it is actually working; Chinese and Nigerien officials have begun meeting to reformulate terms of the 2008 agreement.

Niger, thus, proves that within foreign business agreements, regardless of the international clout and authority of its players, both sides posses the ability to prosper or wither with its terms. While in specific terms it is hopeful that Niger retains control and stability of the oil agreements, more generally, this political move is an optimistic model for other issues. Accordingly, Niger’s resistance to China has significant implications for countries conducting business with China, African nations experiencing exploitation, and the management of the environment internationally.