Putting a Stop To "Stop and Frisk" Laws 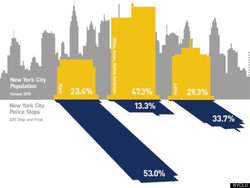 On September 9th, a federal judge in New York City ruled New York Police Department’s controversial stop-and-frisk policy unconstitutional. Stop-and-frisk allows police officers to stop and search any suspicious looking individual, toeing dangerously close to our fourth amendment rights against search and seizure. The court ruled that policies facilitated “indirect racial profiling” because data from stops shows that racial minorities are targeted in disproportionate numbers.  Almost 80% of individuals targeted for stop-and-frisk are minorities, and the police officers tend to target neighborhoods that are heavily populated by minorities.  While proponents of stop-and-frisk point out that minority neighborhoods have higher crime rates, they ignore the fact that roughly 90% of people pulled aside for stop-and-frisks are found innocent.

While critics of the policy praise the court’s decision, New York City Mayor Michael Bloomberg feels the court did not give the city a fair trial. The Mayor, who is primarily responsible for ramping up the stop-and-frisk program, cites the program’s success in reducing the crime rate as evidence of its necessity. The Mayor stands by the Constitutionality of the policy, and strongly believes it is one of the reasons New York City’s crime rates are steadily decreasing.

The decision also involves a re-hauling of the stop-and-frisk program by an outside source. The judge selected Nicholas Turner, president of the non-profit Vera Institute for Justice, to lead the reform efforts, which will include town hall meetings with police and the public.  Additionally, the reform efforts will include a pilot program in which police officers wear body cameras while on duty. These cameras will allow the police department to collect more data on what kind of people are being stopped, and potentially make the officers more aware of the methods they use to determine suspicious nature.

Stop-and-frisk policy forces politicians to consider the tradeoffs between safety and civil rights.  There is precedent for the suspension of civil rights in exchange for increasing safety—most notably policies like the Patriot Act and the recently revealed data collection by the NSA. Sometimes it is necessary to sacrifice personal privacy for increased security, but the real issue lies in the ambiguity of the policy’s effectiveness. The correlation between decreasing crime rates and increased stop-and-frisk occurrences cannot be proven with absolute certainty, which calls into question its legitimacy as a means of increased security. A multitude of factors contribute to decreasing crime rates, and it is impossible to isolate the magnitude of each effect.  While stop-and-frisk claims to champion safer streets, many question the real impact of the program. Do the benefits of slightly reduced crime outweigh the cost of infringing on citizens’ basic civil rights?