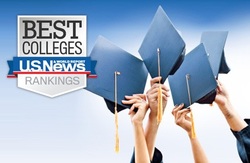 US News & World Report launched their 2014 college rankings last week. Both high school and college students alike were eager to see how their prospective or current college or university stacked up against its peers. How much credence can we lend to these rankings, and to what extent do they influence the decisions of high school students as they consider their post-graduate prospects? Some argue that they ignore financial aspects that hinder many families from sending their children to schools such as Princeton, Harvard, and Yale, which unsurprisingly top this year’s list. President Obama, however, has devised an alternative way to rank our nation’s colleges and universities. His proposal calls for rating these institutions and ultimately linking these ratings to financial aid.

According to the US News and World Report’s website, their methodology for ranking each college consists of seven categories. These include undergraduate academic reputation, graduation and retention rates, faculty resources, student selectivity, financial resources, alumni giving, and graduation rate performance. While some of these categories are comprised of indisputable numbers, others have been criticized for being grossly subjective. For example, “reputation” can be interpreted in many different ways, which could alter the meaning of a given university’s ranking. In addition, access to the precise calculations is limited, which casts a cloud of suspicion over their validity. These rankings are generally considered to be pageantry, and they have no implications for the drafting of public policy, but Obama’s latest plan has real, political ramifications for the nation’s universities. Students who attend the universities that top this list will be awarded additional financial aid.

The new federal ratings system will be drafted by the Department of Education as a part of the reauthorization of the Higher Education Act. Obama’s plan calls for a rating system based on tuition, graduation rates, debt and earning of graduates, and the percentage of lower-income students who attend. Pending congressional approval, his hope is to base federal financial aid on these rankings. His goal is to use the rankings to impact the amount of financial aid awarded to students by 2018. American Council on Education President Molly Corbett Broad referred to Obama’s plan as a “sweeping, thoughtful proposal that aims to help students and families access and manage the costs of higher education.” The proposal ensures that federal financial aid recipients are working their way toward a degree by providing financial aid over the semester, instead of shelling it out in the beginning as a lump sum. His plan creates competition and innovation among colleges and universities and simultaneously keeps debt under control.

College rankings ultimately should not only have a financial component, but also subsequently have implications for the shaping of our national legislation. When it comes to making a college selection, accessibility is a major determinant for the vast majority of American families. Consequently, information about the financial feasibility of each university should be available and disseminated to the public. The rankings that Obama’s plan proposes will give Americans the information they need to make informed decisions about a major familial investment.