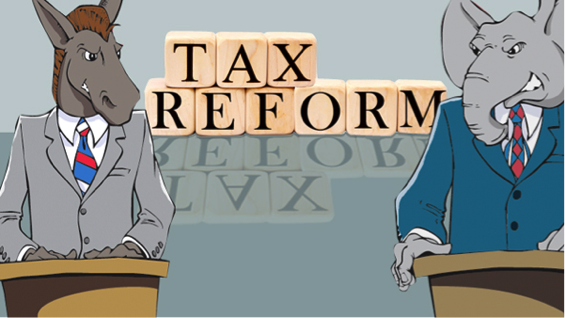 ​We are in the thick of that exciting time in the election cycle when the candidates start to reveal their tax plans. Now, instead of squabbling over Clinton’s email saga or how objectionable Trump has been acting this week, we can have a discussion about their plans to distribute our nation’s wealth.
Finally we will have some substance in these debates; finally the candidates will talk about actionable issues instead of slamming each other over Iraq War votes or Supreme Court appointments from over a decade ago, right? Well, not really.

I argue that these early tax proposals are just as political and less substantive than the social issues we discuss. Their goal is not to reform policy as they see fit, but rather to appeal to voters and ultimately get elected. As a result the proposals are far off-center. Let’s take as examples the tax proposals of Bernie Sanders and Jeb Bush, two experienced candidates both in contention for their party’s nomination.

Bush's tax plan calls for slashes in tax rates across the board. He would reduce the amount of personal income tax brackets from 7 to 3 – one at 10% for individuals making up to $43,750, the next at 25% for those making up to $97,750, with the top bracket taxing all earners over this number at 28% marginal rate. Under this system, an individual making $97,000 per year would pay the same marginal tax rate as the top 1%. That’s quite objectionable given our nation’s rampant income inequality. The tagline of his tax plan is to “unleash” the economy so that it can grow at a stellar rate of 4%. Of course, this ignores the fact that there is little to no demonstrable relationship between tax policy and GDP growth. The kicker? Bush’s plan is projected to cost $1.2 trillion over the next decade – and that’s with the study’s generous economic growth projections taken into account. Note that the main disagreement over tax reform is whether it should be increase tax revenue or be revenue neutral. Absolutely nobody is lobbying for a tax shift that increases our deficit, but Bush’s plan would do just that. We see an overarching theme here – business friendly, top 1 percent-favoring supply side economics, with all its empty promises and trillions added to the national debt. A plan like this can only be seen as an appeal to voters, not as an honest proposal to fix out the tax code.

Bernie Sanders hasn’t released his full tax plan yet, though he has provided parts of it throughout his campaign. From what we can put together so far, his ideas are no more realistic than those of Bush. Making public college completely free for everybody and funding it through a tax on Wall Street speculation is about as politically feasible as legalizing black tar heroin. Clearly, this proposal is nothing by a thinly veiled attempt to gain the support of young voters and capitalize on anti-Wall Street feelings. Funding his other proposals, such as establishing single-payer health care, a paid leave fund, and universal Pre-K education would necessitate unpalatable increases to the federal spending, as beneficial as they would be to our nation. Here, Sanders appears to be the unrealistic liberal with grand plans that will bring prosperity to all, but with little to no idea where the money will come from (though he does have robust plans to increase tax revenue, they won’t cover nearly all of his social programs). As with Bush, this is clearly just an appeal to voters and not a serious political agenda. While we should listen to the debate regarding these plans, we shouldn’t confuse them for considerable tax reform options.

The Tax Reform Act of 2014, crafted by David Camp, former House Ways and Means Committee Chair, shows what a comprehensive tax reform will look like – ugly, complex, and full of awkward compromises. One columnist called it “the ultimate reality check on tax reform.” At a whopping 979 pages, it features a reduction in tax brackets (although they’re much more reasonable than Bush’s), which are made possible by key compromises on corporate and wealth taxes. All of these elements are far closer to the center than what each candidate is proposing. While the bill was ultimately defeated due to fierce competition over its reduction of income tax progressivity, its very completion was viewed as a huge accomplishment. It took no less than three years to draft, and during that time Committee staff found hundreds of ways to improve our current tax code in areas such as pensions, higher education, and research and development just to name a few. When policymakers again look to change the way the federal government receives money, the first place they’ll look is the Camp draft – not to the Presidential candidates’ ideas. And let me tell you, they are worlds apart.
​
To even be considerable, any Tax Reform bill must swallow the entire policymaking process. It requires hundreds of compromises from both sides of the aisle, it must balance the vast influences of powerful stakeholders, it can’t alter the current bureaucracy of tax collection, and it all has to be supported by rigorous economic research. The Camp draft went through all of that, while our candidates’ plans were drafted with only one thing in mind: increasing popularity. So as political discussion about taxes heats up, keep in mind the large gap between current talking points and the harsh reality of comprehensive reform. Know that if you want to educate yourself about tax reform, look to discussion of the Camp draft instead of the debate surrounding our candidates’ platforms.