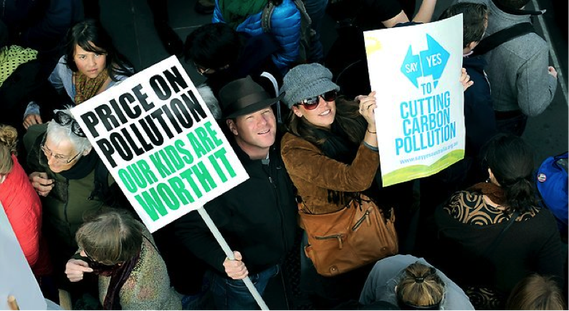 During the past year, there has been a lot of talk about the need to combat global climate change. The fifth International Panel for Climate Change Assessment reported a set of four scenarios called “Representative Concentration Pathways” that represent a set of initial conditions and projections to the year 2100. The report claims that the pathways that reduce emissions now will have the best long term economic performance, whereas the pathways that follow business as usual strategies are least profitable in the long run. Investments made now can be extremely beneficial as the cost of future damage is dwarfed by the cost of current mitigation. Even Pentagon, in its recent report, has highlighted climate change as an “urgent and growing threat to national security” as it will exacerbate poverty, degradation, social tensions and domestic stability of various countries. Even though, many critics attribute climate changes to natural events, it is no surprise that NASA’s Goddard Institute for Space Studies found strong direct correlation with increasing concentrations of carbon dioxide in the environment and increasing land-ocean temperatures. This correlation was extremely small for the change in natural events like the sun, ozone depletion, Earth’s orbital locations and the increase in temperature, proving that man-made sources have the biggest and most direct relation with climate change. The IPCC states that in order to sustain our Earth and avoid various disastrous effects, we need to cut carbon emissions by more than 80 percent by the year 2050.

United States is the second largest emitter of carbon dioxide in the world, only recently preceded by China, without even accounting for the carbon that is emitted due to offshore production of our consumer goods. Various fragmented polices have been enacted to reduce carbon emissions; however, they have all reported only limited success. Implementing a universal carbon tax will be extremely beneficial and be a lot more simplified than implementing other forms of carbon reduction policies. A carbon tax is simply a tax that raises the price of burring carbon and makes renewable substitutes of energy comparatively cheaper. The tax is levied at each point where fossil fuels or carbon rich fuels enter the supply chain of the country, either through extraction or imports. It directly modifies behavior without the involvement of trade or depending on market volatilities. The tax should be pegged down to the carbon content of the fuel and costs are passed down the supply chain to the extent the market allows. A tax of 12.50 dollar per metric ton that rises by that amount annually will cut the carbon emissions by 42 percent, which is on track for cutting 80 percent of the emissions by 2050. This will allow small companies and households to have the time to adapt and think about alternatives, as the tax will rise steadily and predictably.

Obama recently introduced the first Clean Power Plan that sets flexible and achievable standards to reduce carbon emissions by 32 percent by 2030 by 2005 as a baseline. The policy, for the first time ever, sets to establish national standards for the largest sources of carbon emitters. However, the plan is very complex, involves a lot of bureaucracy, and targets only electricity generation.  Subsidizing clean energy is expensive, costs were estimated to be over 88 billion in 2013,  and unfairly rewards the rich. Because of the expensive initial investment, only the rich can afford to switch. Subsidies also do not effectively reach the whole population and are very inefficient. The full results of implementation will only be seen in the long term.

Alternatively, cap-and-trade is a widely accepted carbon emission reduction policy. It aims to reduce the emission by capping the amount of total allowable emissions and allowing emitters to trade carbon allowances. However, depending on market volatility, sometimes carbon credits become so cheap that they are rendered ineffective. It is extremely difficult to size the market and decide the appropriate number of carbon credits. It is unfair to decide a universal standard as different regions have different development patterns and the policy will not be effective if the number of credits is not precise. Additionally, based on behavioral economic principles, we can see that carbon tax will be more effective than carbon tax as people are loss averse and will respond more quickly to avoid paying an additional tax than to gain a few dollars by selling off their extra credits due to improved efficiency.

Yes, carbon tax will raise the prices of all goods since fossil fuels are used in all products’ life cycles and will negatively affect the economic growth. However, the government can use the revenue generated from the taxes to help fund educational, medical or social programs for poor people to protect them from being unfairly targeted under the carbon tax as poor people are the ones that consume carbon intensive products. Thus, this policy can help reduce income gap and fund more social welfare programs. Many critics are skeptical that carbon taxes will hurt the economy, as it will push oil refining and manufacturing products offshore. However, USA can simply tax the carbon content of the products imported to offset thee price disparity. Many countries like Sweden, most of Europe and British Columbia are already taxing carbon content of imports and the policy seems to be highly effective and generates a sizable amount of revenue. Recent polls have showcased that public opinion is rapidly changing and nearly 99 percent of all counties in America believe that climate change is caused by human activities.  They also prefer big government solutions like taxes rather than market-based solutions like cap-and-trade.

Thus, it is evident that the American public wants effective actions to combat climate and carbon taxes can deliver that better than any other policy alternative.